Welcome to Leafly Canada’s live 4/20 coverage for 2019! We’ll be updating this post throughout the day with rolling coverage of news, events, and other things to keep you informed and entertained no matter how you’re spending Canada’s first legal 4/20 holiday.

“I see smiles everyday, and I get to help people,” said Clifton Nicholas, co-proprietor (along with his partner Maria Canatonquin) of the Smoke Signals dispensary in Kanehsatake Mohawk territory, roughly an hour outside of Montreal.

For Nicholas and Smoke Signals, 4/20 does double duty. It’s obviously the year’s biggest cannabis holiday, but this year represents the first anniversary since the former filmmaker (and anthropologist by training) opened his dispensary in his home community, and many parts of this past year have been a battle.

Initially, 4/20 was a day of resistance. It was always meant to push the powers that be to bring legislation to end what never should have been illegal in the first place.

Nicholas’s dispensary was opposed by the community’s elected Grand Chief Serge Simon, whose Council has not yet tabled its own cannabis legislation. However, because of the political complexity of Kanehsatake, which no longer has its own police force, if Simon wanted to shut down dispensaries like Nicholas’s, he’d have to call in the provincial police force la Sûreté du Québec.

Not every Canadian knows the name Kanehsatake, but most remember the Oka crisis—the 1990 period of civil unrest during which Kanehsatake’s Mohawk Warriors’ Society waged armed warfare against first the Sûreté du Québec, killing one, and later the Canadian Army, after a golf course in the neighbouring non-Native community of Oka attempted to expand into an area the Mohawks of Kahnawake consider sacred. After a six-week siege of the community (during which an Elder died), negotiators from both sides were able to end the crisis without further deaths. But the Kanehsatake/Oka crisis is a longstanding injury, and left many people in Kanehsatake committed to defending their sovereignty by any means necessary.

“Initially, 4/20 was a day of resistance,” Nicholas said. “It was always meant to push the powers that be to bring legislation to end what never should have been illegal in the first place. So it’s important to me, given the problems we’ve seen in the past with heavy-handed policing. Indigenous people have suffered a lot, and it’s time for us to benefit.”

Cannabis, for Nicholas, is a huge part of that benefit. He’s a recovering opiate and cocaine user and credits cannabis with helping him leave those drugs behind. He also says it helped him lose 150 pounds and curb his diabetes. That’s to say nothing of the effect it’s had on his depression, which he says finally lessened when he turned to medical cannabis.

“This is an industry Indigenous people need—economically, medically, and spiritually,” Nicholas said, Yet we’re being shut out of it, even as cannabis can help our people struggling with addictions.”

Smoke Signals has been doing a tidy business for a year now, ushering in with it a number of other dispensaries in the territory. Naturally, Clifton sees the competition as an opportunity to level up.

Nicholas and Canatonquin’s try-anything spirit permeated the event. On one side of the dispensary’s wide yard, there was a smoking-lounge tent with free tacos, a resin press for anyone who wanted to turn dried flower into something more potent, and a stage for a band. Across the parking lot, another tent offered a mechanical bull and a few other fairground challenges. Nicholas announced that anyone who could stay on the bull for regulation eight seconds could take a way an ounce of bud, and in short order, two well-balanced young men happily collected their prize from the dispensary.

Rain might have dampened celebrations but Toronto crowds still turned out in high .

At Woodbine Park, the wet weather created swampy conditions for the vendors’ market that saw black market distributors hawk their wares, everything from bulk bud to sweet infused treats.

In Kensington Market, at the HotBox Shop & Lounge celebrations took place under tents on the backyard patio that has newly been approved by city inspectors to operate as a legal cannabis consumption space—on the condition that they don’t serve food.

OTTAWA — On Parliament Hill, the official 420 event was as much a protest as it is a party.

During a press conference on Thursday morning, the organizers made clear there are still issues the federal Liberals have left hanging, making the job of legalization incomplete.

The Marijuana Party of Canada says the Liberals need to expunge past convictions for simple possession, instead of suspending records, and issue a formal apology for the harms prohibition had particularly on black communities.

There are also concerns being raised about the government’s decision to tax medical cannabis.

With files from The Canadian Press

Cops Are Looking for Stoned Drivers. Don’t Be One

End this happy holiday in bed, not jail. Find yourself a designated driver or take advantage of the many 4/20 deals offered by rideshare companies.

Law enforcement agencies across the country are using the holiday to remind drivers of the dangers of driving high and Canadians should expect mounting DUI emphasis patrols on 4/20, because 4/20 isn’t exactly a secret anymore.

When transporting #cannabis in a vehicle, it must be in its original package that has not been opened, or packed in baggage that is fastened closed or is not otherwise available to anyone in the vehicle. #StaySharp – Know the Facts on #420Day #DontDriveHigh pic.twitter.com/jlaIqKCnvL
— Ontario Prov Police (@OPP_News) April 20, 2019

While it’s clear that it’s illegal, across Canada, to consume cannabis while you’re driving, or to drive under the influence of cannabis—the rules for safely–and legally–transporting cannabis in a vehicle may vary by jurisdiction.

The safest bet: if you are transporting cannabis, keep it in the trunk of your car where it is definitely out of reach of the driver or any passenger.

Great Moments in Weed History w/ Abdullah and Bean (recently named by Leafly as one of the best podcasts to get high to) delves deep into humanity’s more than 10,000-year relationship with cannabis to find the humor, heart, and historical importance of this very special plant. 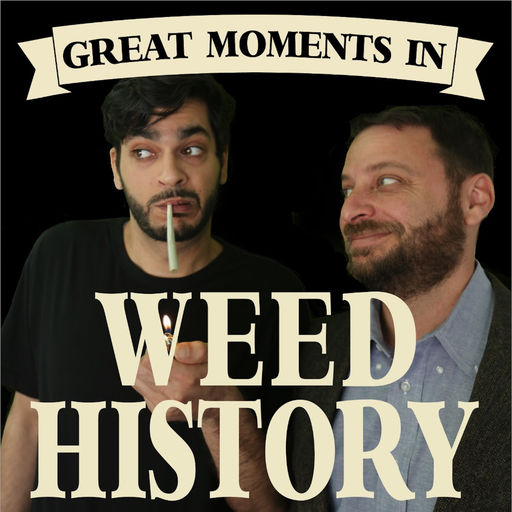 To celebrate 4/20, they’re helping us count down 10 of their favorite stories from the long and fascinating history of cannabis. Read on for the first installment, check back for more, and don’t forget to subscribe via Apple Podcasts (iTunes), Spotify, Stitcher, Soundcloud, or Google Play.

1964: Bob Dylan Gets The Beatles High for the First Time

When Bob Dylan arrived at New York City’s swanky Delmonico Hotel on an August night in 1964, he mistakenly believed the Beatles—whom he was meeting for the first time—already smoked grass, based on a misheard lyric on I Want to Hold Your Hand. But when Dylan offered to smoke them out, John Lennon had to bashfully point out that the lads from Liverpool were actually singing “I can’t hide,” not “I get high” on the chorus.

From there, a scene unfolded straight out of a B-movie stoner comedy, only it starred some of the 20th century’s most influential and enduring artists at the very outset of their storied careers.

According to journalist Al Aronowitz’s lengthy first person account of the encounter:

I still hadn’t learned how to roll a joint in those days, so when the Beatles agreed to try some, I asked Dylan to roll the first joint. Bob wasn’t much of a roller either, and a lot of the grass fell into the big bowl of fruit on the room service table…

Get more Great Moments in Weed History by subscribing to the podcast on Apple Podcasts (iTunes), Spotify, Stitcher, Soundcloud, or Google Play.

You know the cannabis holiday is on its way to mainstream acceptance when corporate Canada starts stoking the flames.

Popular chain Pizza Pizza, for one, is marking the occasion with a $4.20 walk-in deal all day. It might seem a little opportunistic, but hey, the munchies are real.

A Super Saturday at Superette

The “high variety” store in Ottawa is ready to celebrate! The kitschy cannabis store, which opened on Apr. 1, marks its first 4/20 with a festive vibes with a DJ on site, free cookies, and 20% off all prerolls and accessories.

Whether picking up supplies or looking to score a sweet deal on a new bong, Canada’s new crop of retailers are marking the day with sales on strains, prerolls, accessories, and more! Leafly’s put together a list of online retailers offering special sales in honour of the holiday.

4/20 has proved a popular day for cannabis store openings across the country.

Triple J’s Canna Space, the first private cannabis retailer in the Yukon opened on Thursday, and Toronto gained yet another bud boutique with the timely launch of Nova Cannabis on Queen West.

Elsewhere in Ontario, outlets of Canna Cabana in Hamilton and Sudbury make their debut today.

Find Cannabis Stores Near You

How will you be commemorating Canada’s first 4/20 post-prohibition? From block parties and concerts to comedy festivals and green yoga, there’s no shortage of festivities taking place today. We’ve compiled some of the biggest events happening across the country.

No, “420” is not police code for cannabis consumption. And unless you know about the treasure map, there’s more to that origin story you’ve likely heard than “let’s meet at 4:20 to blaze it.” The truth is that it all started with a Coast Guard sailor, a secret map, and some students in California known as the Waldos. Explore the epic tale as reported by Leafly contributor David Bienenstock, one of California’s most seasoned cannabis reporters.

But wait, there’s more! Act now, or whenever, and we’ll throw in a chronic chronology of great moments in 4/20 history. It includes winners like this guy, who probably deserves a toast today.

It’s the Perfect Day to Learn to Roll a Joint

The first time I ever tried to roll a joint, it was 4/20. I wrapped the paper around a pencil, sealed it, then stuffed in some flower. I went outside with a friend, sparked it, and proceeded to watch the thing canoe so badly that I brought most of the unburnt cannabis back home in the palm of my hand.

Don’t be like me back then. Find a friend, grab your supplies, and get crafting. Practice makes perfect. (Don’t forget the crutch!)

Edibles Are Great—at the Right Amount

If you’re new to edibles, the best advice is to start low and go slow. Don’t rush to gobble down that brownie, no matter how delicious. This handy chart is a great resource for avoiding an unpleasant experience. Read the full story for more advice on how to find the right edible for you.

How to Be a True Pal to Your Too-High Friend

Whether someone’s new to cannabis or just couldn’t resist another infused chocolate, it’s certainly possible to cross the line from high into too high. There’s no shame in that. But if you or a friend aren’t enjoying your 4/20 experience, that’s a problem. We’re here to help.

Looking for more tips and tricks? Head over to the full article.