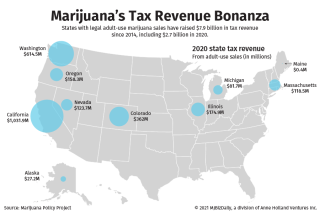 In this prior post, I flagged of this recent report and accounting from folks at the Marijuana Policy Project titled “Marijuana Tax Revenue in States that Regulate Marijuana for Adult Use.”  While that report focused on cumulative tax revenue in various states, this recent MJBiz Daily article, headlined “Marijuana legalization efforts get boost from billions in MJ tax dollars,” drills into some more tax specifics while also discussing the MPP report.  I recommend the piece in full, and here are excerpts:

Adult-use marijuana programs are generating billions of dollars in tax revenues for state governments each year – bolstering the economic and equity case for legalization in other markets across the country as well as at the federal level. The economic argument might particularly resonate among reluctant Republican lawmakers on Capitol Hill, experts say….

MPP’s tax revenue report comes as the organization is involved in adult-use legalization advocacy efforts in Connecticut, Delaware and Rhode Island – and in the wake of successful recreational marijuana legalization across the country in the past few months from New York to New Mexico.  Maryland is on MPP’s radar for next year … as are potentially several other states….

Social equity and racial justice issues have become critical pieces in adult-use legalization negotiations, and tax revenues are important because they help fund those programs.  In New York, state tax revenues will be directed toward community reinvestment grants (40%), public schools (20%) and drug-treatment and public-health programs (40%).

The report doesn’t detail the hundreds of thousands of dollars of revenue generated for cities and towns from local cannabis taxes or the various economic development impacts such as job creation.  But other studies have.  The newly published MJBizFactbook, for example, estimates that the total U.S. economic impact from marijuana sales in 2021 is expected to reach $92 billion – up more than 30% from last year – and upwards of $160 billion in 2025.