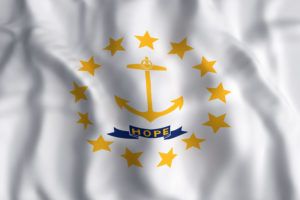 The state’s MMJ program is dominated by three vertically integrated businesses, wholesale prices are falling, and the Ocean State’s 41 stand-alone growers must battle over a small customer pie.

They report an increase in traffic from out-of-state MMJ cardholders in neighboring Connecticut and Massachusetts.

They also point to the possibility that state lawmakers may legalize adult-use sales – although some legislators have raised doubts about the initial legalization plan.

The state’s 41 licensed cultivators – regulators have approved a total of 74 – sell to roughly 18,000 MMJ patients via just the three retailers.

According to the Marijuana Business Factbook, the state’s rules for the three vertically integrated companies are far less extensive and detailed than in other medical cannabis markets, and sales via dispensaries were estimated at $30 million-$35 million.

Growers are reporting wholesale flower prices as low as $1,200-$1,500 per pound, down considerably from $2,000 or more a pound the previous year.

“It’s lower here because we really only have three outlets,” said Lisa Holley, a lawyer with about 50 cannabis clients, including the Rhode Island Cannabis Association.

“It’s not like other states, where the growers can sell to other outlets.”

On the way up

Despite the obvious challenges, some industry watchers are bullish about the markets’ prospects.

Holley said the market has improved since last year.

“I see the market in a real uptick right now,” she said. “We’re not where we were when the market first came around, but we’re pretty darn close.”

In 2018, Holley’s clients were scaling back their operations, even cutting back on their energy usage so they wouldn’t go under.

“Right now, most of my clients have been able to sell anything they have,” she said. “It’s a very different market.”

Flower that tests high for THC content can still sell for up to $2,000 a pound wholesale, according to Holley.

Several of Rhode Island’s licensed cultivators spoke with MJBizDaily, but they wouldn’t comment on the record for fear of retribution if any of the three centers perceived as negative what they said about the market conditions.

One consultant, Paula Elfering in Providence, explained the cultivators’ stance by saying, “I can understand why they don’t want to speak out. This is their only option.”

She didn’t shy away from her criticism of the state’s licensing structure and its impact on the cultivators.

“We have a monopoly in Rhode Island,” Elfering said. “You have 41 cultivators vying for sales from three centers. So, those centers can pay as little as they want. They absolutely control the market.”

She mentioned the energy costs the growers incur. “It’s not sustainable at all for a cultivator.”

Yet, the retailers seem well-positioned in the market. An ounce of cannabis flower can cost as much as $420, according to Elfering.

“Which is not affordable to most patients,” she said.

Plus, the vertically integrated companies are allowed to grow their own cannabis.

“Now we’ve got a plethora of cultivators with nowhere to go,” said JoAnne Leppanen, executive director of the Rhode Island Patient Advocacy Coalition. “It’s a mess.”

So, do the three centers control the market?

“Expanding the market is needed for business owners and the general public,” he said. “We feel more limited by the lack of having other places to sell to, but all of these things are coming.”

Raimondo’s proposal would add six more dispensaries, with three of the locations given to the existing vertically integrated companies.

The other three new dispensary-only licenses would not be vertically integrated.

Despite initial pushback from some lawmakers, Cavanagh is confident the state will legalize recreational cannabis soon and that the existing license holders will get first crack at adult-use permits.

“Nothing’s been put into writing yet, but we do have some comfort we’re going to be extended some ability to take advantage of our track record,” he added.

Elfering would like the state to allow for more competition.

“There is none right now,” she said. “Patients are told, ‘You get what you get,’ and they don’t have a lot of options.”

According to analyst Matt Karnes, founder and managing partner of New York-based GreenWave Advisors, the MMJ market in Rhode Island is “vulnerable to a new recreational market in Massachusetts, coupled with looming legislation in other New England states.”

Lawmakers in Connecticut, for example, are pushing for recreational cannabis legalization.

His route home takes him into Massachusetts, where he could easily purchase legal recreational marijuana before returning to Rhode Island.

The proximity to adult-use cannabis just across the border adds an incentive for lawmakers to legalize it, Markarian added.

“It’s kind of making it look ridiculous,” he said. “It’s pressuring the governor to pass the necessary bills that need to be passed.”