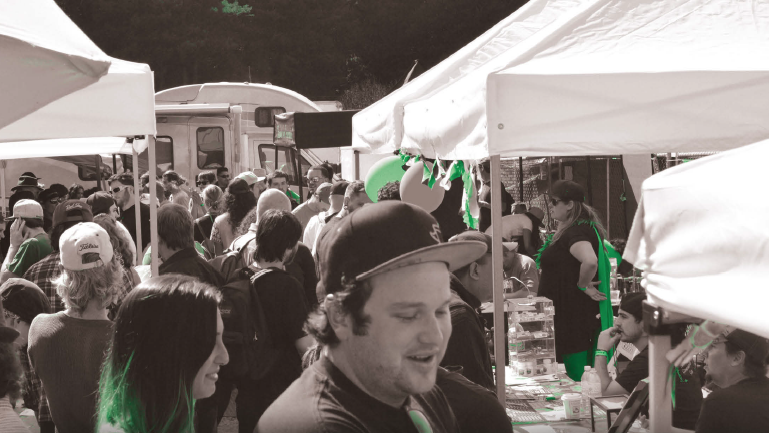 Humboldt County, at the top of the State in Northern California, is where fine cultivation and hybridization of the plant has been happening for decades. Raising THC levels for recreation over the past 40 years has been an obsession; bringing THC levels back down again is the current trend. Yet, with all this activity, Humboldt and neighboring Trinity and Mendocino Counties – making up what’s referred to as the “Emerald Triangle” – has remained purposefully covertly hidden from mainstream culture.

Others have taken Humboldt’s strains home to their own states, with praises and celebrity given, but Northern California growers have been hesitant to take credit – until now. And while they won’t ‘out’ their State-line-crossing neighbors, they would like to get credit where credit is due for growing some of the finest medicine in the world.

Legalization is looming for California in 2016, and farmers are coming out of the woods, so to speak, getting business permits, having their longtime lands checked for compliance, setting-up rainwater catchment systems and coming together in town hall meetings across the counties, talking about what’s next. The top of the conversation is conservation – following in the footsteps of stewards of the land before them, with an eye on preserving what we have for future generations. With this newfound networking, locals are feeling more secure and public celebrations of the plant are being openly held for the first time (smoke outs on 420 (April 20) have been quelled for several years as parks are cleared and locked on the blessed day in Humboldt). The first-ever CannaFest was held this past April in the more conservative town of Eureka – Humboldt’s County seat. The event was the perfect end to “Humboldt Green Week,” where environmentally friendly events were organized throughout the county, with CannaFest held at the equally historic Redwood Acres Fairgrounds.

The event mirrored typical Cannabis events found in more metropolitan areas, with a twist, as Cannabis farmers mimicked county fair fodder, hosting “Grow Games” of relay races with participants competing in potting up plugs, while putting a normal face on tending the herb. Event organizer Steve Geider said the “grower Olympics” had been an idea for more than ten years, stating, “Our committee is excited to produce “Humboldt Grow Games” for many years to come, and will eventually be a full day of activities in a full-scale production.”

The day began with the “Yes We Cann!” community parade to the fairgrounds, led by rope smoking, hemp loving Benjamin Franklin himself in horse and buggy, played by Thomas Hummel, father of fest co-organizer, Lori Cosgrove. Amazingly, Hummel hails from the City of Brotherly Love, Philadelphia, and traveled three thousand miles to play the man who encouraged the country to plant Hemp. The parade was another huge first, with hydroponic shop trucks boldly pulling flatbeds decked out in green-glitter pot leaves, hosting rock bands through the town of Eureka, with participants carrying signs and sporting green t-shirts proclaiming, “I am a Farmer,” and “I love Farmers.” Yes, “Farmers,” not the stale semantics of the past. Growers are farming and “dealers” are “healers” in the new world of weed in America and beyond.

Of the many firsts, there was a medicating area set-up outside on the fairgrounds, jam-packed with patients, product and dab stations. But this is Humboldt, and medicine was out in full force via tinctures, oils, and medibles by some of Humboldt’s finest organic farmers and producers.

Humboldt medicine maker Sunshine Johnston’s table held bottles of tincture under her “Sun Boldt Grown” brand, with medibles and more dished up with plenty of healing information. “After living in the Cannabis farming culture of Humboldt for more than 30 years – seeing the evolution of the craft and artisanship that has not been able to be shared for fear of retribution – it was so cool to share the idea that this medicine could be delivered fresh to patients!”

Over her table, Johnston said she was able to share “dietary supplements” like freshly juiced buds, CBD cookies, CBD chai tea with homemade hemp milk, and a signature brand of “Loopy Fruit” to smoke. Johnston said the flowers were grown on the farm with reverence, representative of the small farmers of Humboldt. She is one of the many small farmers who are working to come into compliance to be an above board, legal business, with an eye on the future.

“Navigating the pathways of legalization is confusing,” Johnston shared. “We are following the advice of legislators and others as we try to form a co-operative that truly serves our community, and are leading by example as we come out of the shadows. For example, we are working on a land-use ordinance that would protect small farmers and the fish in our watershed. Our goal is that Humboldt’s Cannabis heritage and our role as stewards of the land is preserved. It’s a bit scary and it is truly liberating!”

Vendors offered up the usual fare of smoking and dabbing apparatus, with Humboldt’s own retail trimming shop, “Trim Scene Solutions,” displaying hi-tech machines for making real medicine. One trimming production line system displayed can snip up to five clean pounds an hour with no human hands touching the bud from start to finish. Its shining stainless steel “Dab Genius” cooker comes at a price tag of around $10K, making oil safely and cleanly.

Along the line of conservation, there were organizations tabling information on water conservation and other environmental concerns plaguing the region, such as large grows with big equipment altering watersheds, draining creeks, bringing in generators and diesel fuel to the mix. Companies consulting on soil and water testing and land use are coming out of the woodwork now for farmers, and they are all ears with eyes to the future of sustainability.

Ancillary products of the plant are getting more commonplace via clothing, jewelry, art, and games. Jim and Erin Gray of McKinleyville are having fun with Humboldt’s largest cash crop, and created a board game, “Weed the game,” taking players on a wild ride of weed mishaps, inspired in-part by the historic C.A.M.P (Campaign Against Marijuana Planting) began in 1983.

“We met in Arcata 30 years ago,” Jim said. “The area was very much like it is now, economically depressed, lots of people working for minimum wage, lots of homeless and plenty of young people trying to grow Cannabis – then a felony.” Jim said the couple left Humboldt for some years, but recently came back to the region they love. The game is a reflection of struggles from the region, complete with helicopter raids, jail time, and the occasional “good year.”

“Erin made the proto-type board game where you could take different routes to grow – greenhouses, back yards, Forestry Service land, illegal trespassing onto private property – and each one had its pratfalls,” Jim explained. “Many of the playing cards are based on real experiences, your neighbor destroys ten plants because they are over the property line, or a cop knocks on your door to return your wallet and you flush 50 seeds down the toilet.”

The game launched at the Seattle HempFest in 2013 and currently is distributed in Humboldt shops (who say they can’t keep it on the shelves), festivals, and online via its Web site. You can find their website details, along with a few others, at the at the end of this article.

Fest with a Green Heart

Festival organizer Geider has been in the ancillary business of the industry for more than 10 years since founding Northcoast Horticulture Supply (NHS), a chain of stores in the county offering a plethora of growing supplies for indoor and out, including soils, fertilizers, and amendments, including hydroponic and soil-based systems.

The industry has been good to him and he decided to give back, organizing the county’s first fest under the shingle, “Humboldt Green,” after nine years of organizing “Humboldt Green Week,” less the county’s largest cash crop. “I’ve always enjoyed bringing different folks together,” Geider said. “Cannifest was the culmination of many years of planning and eleven weeks of jumping through hoops to make this work for the City of Eureka, the County, and State levels – with the Fire Marshalls being the most intense. The 2,200 attendees and 250 people working together made the fest a success in its first year.”

In true “Humboldt Green” tradition, the event left a green foot print – something other events at the historic venue have never done. “We greened the event while it was happening,” Geider shared proudly. “With help from other community members and groups we were able to leave behind a rain catchment system that can catch 67,000 gallons from one 2,000 square foot rooftop in a normal rain year.” Stated as one of the “calmest” events the venue has ever held, festival goers attribute the lack of violence to the herb that is historically lowering crime rates in legal states – Colorado, for one, down 25 percent in its first legal year. They also broke garbage records at the fairgrounds, with just one trash container hauled away at event’s end, where past events use three or more.

“All food waste was composted on site we built using cardboard from the event to make worm binds during the event!” Geider added. “Redwood Acres told us we had one-fifth of the waste that usually comes from a crowd of that size.” When asked if he’ll bring the fest back next year, it was met with a resounding, “Yes, we CANN!” mirroring the theme. “This event could be reproduced nationally and internationally, in time,” Geider added. “Humboldt County is the worldwide leader in all things Cannabis, so the world should prepare as we embrace this change together, and look to the leaders to guide our path.” Education via games, festivals, and allowing medicine makers to set up tables to enlighten on good medicine is what legalization can bring to a state, and those in the industry in Humboldt are ready to play.