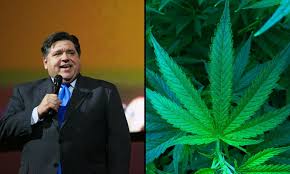 As reported in this local article, “On the day before recreational cannabis becomes legal in Illinois, Gov. J.B. Pritzker announced he was pardoning more than 11,000 people who had been convicted of low-level marijuana crimes.” Here is more:

“When Illinois’ first adult use cannabis shops open their doors tomorrow, we must all remember that the purpose of this legislation is not to immediately make cannabis widely available or to maximize product on the shelves, that’s not the main purpose, that will come with time,” Pritzker said to a crowd at Trinity United Church of Christ on the Far South Side. “But instead the defining purpose of legalization is to maximize equity for generations to come.”

Pritzker, who has touted the social equity elements of the recreational pot law he signed this summer, was joined Tuesday by state, county and local leaders including Cook County State’s Attorney Kim Foxx, who has already begun the process of clearing the records of those with low-level marijuana convictions in her jurisdiction.

The 11,017 people pardoned by Pritzker will receive notification about their cases, all of which are from outside Cook County, by mail. The pardon means convictions involving less than 30 grams of marijuana will be automatically expunged.

Pritzker and other elected officials said they believe Illinois is the first state to include a process for those previously convicted of marijuana offenses to seek relief upon legalization of cannabis. “This is justice,” said Lt. Gov. Juliana Stratton. “And this is what equity is all about, righting wrongs and leveling the playing field.”…

Officials estimate there are hundreds of thousands of people with marijuana-related convictions in Illinois who could be eligible for relief. Those with criminal convictions can get a copy of their criminal record and start the process, though many of the cases will be automatically expunged by the state in the next couple of years.

The Illinois State Police are searching criminal records to identify eligible cases, which are then sent to the state’s Prisoner Review Board. After the board reviews the cases, the names of those eligible for relief are sent to the governor’s office to be considered for pardon. After Pritzker issues the pardon, the attorney general’s office automatically files petitions on the person’s behalf to expunge the records.

State’s attorney offices across the state are also being notified of eligible cases, which can then be vacated by a local judge. In Cook County, prosecutors are working with California-based Code for America to search for convictions involving less than 30 grams of cannabis. Those cases have resulted in both misdemeanor and Class 4 felony convictions….

Individuals with cases involving 30 to 500 grams of cannabis can also be eligible for relief, but the process won’t be automatic, instead requiring the person to file motions to vacate the conviction, according to the governor’s office.

While a pardon forgives a conviction, an expungement erases it from the public record. When a judge vacates a conviction, it overturns it as if it never happened. When a case is expunged, the case is hidden from public view, but it could be viewed by law enforcement if they obtained a court order.

Many of the elected officials noted that enforcement of marijuana-related offenses have disproportionately affected minorities. The Rev. Michael Pfleger, of St. Sabina Church on the South Side, said the elected officials on the stage had done their job, but it would be up to business leaders in the new industry to provide financial mobility for those individuals. “Employ these individuals,” Pfleger said to the crowd. “Give them a job.”

Ald. Walter Burnett Jr., of the 27th Ward, noted that a pardon for an armed robbery conviction decades ago changed his life and allowed him to serve in public office. He invoked Martin Luther King Jr.’s words to describe how he felt when his record was expunged and how others might feel when they hear news of the pardons. “Free at last,” Burnett said. “Free at last. Thank God almighty, they are free at last.”