Glassware has always served as a fundamental part of cannabis culture, from simple one-hitters and bespeckled bowls to elaborate rigs and bongs. Step into any conventional head shop or bodega, however, and the aesthetic has remained largely the same: psychedelic pattern work, cartoonish riffs on pop culture icons, and corny stash devices. But as cannabis moves into the mainstream, a new generation of independent artists are injecting personal aesthetic and style into functional pieces of art worthy of open display.

Los Angeles-based artist Sibelle Yuksek (@sibelley) didn’t go into glasswork with the intent of making pipes. But that’s precisely what makes her art so different. Combining influences from her teen obsessions with Japanese comic books and gaming, her experiences with yoga and bodywork, and her education in fashion illustration, Yuksek specializes in creating delicate, naturalistic interpretations of female bodies that double as a pipe.

Fondly referring to her pieces as her “little women,” Yuksek might be one of the few people that can get away with objectifying them. Each piece bears its own personality and a sense of movement within the inanimate—long legs, outstretched arms, arched backs. Her most complex piece, which took roughly 40 hours to make, is of a female rig outfitted with a machine gun wrapped from back to belly that looks straight out of “Ghost In The Shell” or “Tank Girl.”

They’re so beautiful that it’s easy to forget that you actually use it to smoke flower or concentrate. In fact, she says most of the people who have bought her pieces haven’t.

“I want to approach it as a fine art perspective; classy, fresh,” she says. “I like the idea of that these are objects first, but the fact they have that function is the cherry on top. You might see a figure on a tableside and turn it over, and you realize it’s completely functional. It adds this hidden surprise.”

Considering the complexity of her art, it comes as a surprise that she fell into the practice accidentally. Majoring in illustration at Virginia Commonwealth University, Yuksek had her sights on fashion before falling in love with a glassmaking elective. She decided to pick up flamework as a double major, which would come in handy for sculptural installations or jewelry making. But it wasn’t until relocating to the West Coast and reconnecting with her mentor, 2 Stroke, that she’d reignite her interest in flamework.

“He was the first person who really inspired me in flameworking,” she says. “He actually contacted me about assisting him at this glass show in Vegas, the AGE show. When I saw him there, he asked me what I was up to, and I was just making jewelry. And he was like, ‘Hey, look at how much money we’re making and what we’re doing in the pipe scene. Marijuana is really popular. You’re on the West Coast—think about it.’”

Like most young artists who can’t afford a studio space or kiln, Yuksek had to get creative. She began the completely ill-advised route of working with a flame torch in her bedroom before eventually landing a gig (and proper workspace) at Neptune Glassworks. There, she learned how to make vessels and glassware, while experimenting with smokables on the side.

“The pipes, I was just trying it on my own,” she says. “I didn’t have anyone to tell me exactly how to make rigs or anything. So, I was looking at what people were doing when I went to the shows, talking to people.”

Last year, it all came together after taking a master class with OG glassmaker, Robert Mickelsen, who taught her how to refine her sculpting with holloware. “I spent so many years studying figure in illustration, doing live drawings, looking at comic books, drawing and drawing and drawing. So. the body has always been with me. But when I took his class, everything fell into place. I know how to work with glass and I know bodies, so he was the glue that put it together for me.”

She still smokes out of her first piece, a “janky” nude she’s kept for sentimental value. “You smoke out of her butt and pack the head. She’s pretty dirty because she’s my personal piece.” Most of her work moves through her Instagram, where she has built a growing following. After focusing primarily on nudes, Yuksek is shifting her energies into making video game characters and anime characters outfitted with accessories and garments. “I think that there are just so many people who can relate to those characters the way that I do, and I don’t see anyone creating them the way that I do. I know I can add my own twist to them,” she says.

Between the pipe scene and glass world, Yuksek is still carving out her own territory as a functional sculptural artist. There’s something daring and uniquely fitting about a woman facing the flames, not adhering to preconceived notions about how a pipe should look or devaluing its legitimacy as art because it can be used for cannabis. If anything, it’s another example of the limitless ways people are reexamining and elevating cannabis culture to a broader market.

“I’m jumping in and seeing what happens. I’m still trying to figure out where my pieces exist. Are they in head shops and smoke shops, or interior design settings? Should they be functional or sculptural?” she says. “From a personal aesthetic, I’m not as attracted to zigzag patterns or rasta colors. But because marijuana is so much more accessible, of course not everyone is going to have the same aesthetic or preferences. Maybe I’m the type of person that reaches out to a different market: people who love smoking, but have a nicely designed home or this item is part of the overall aesthetic that they’re going for. Or maybe it goes on the shelf because they think it’s really cool but they don’t use it. That also informs how I approach the work.” 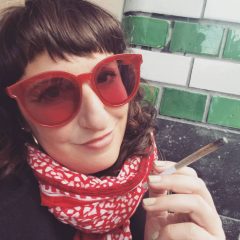