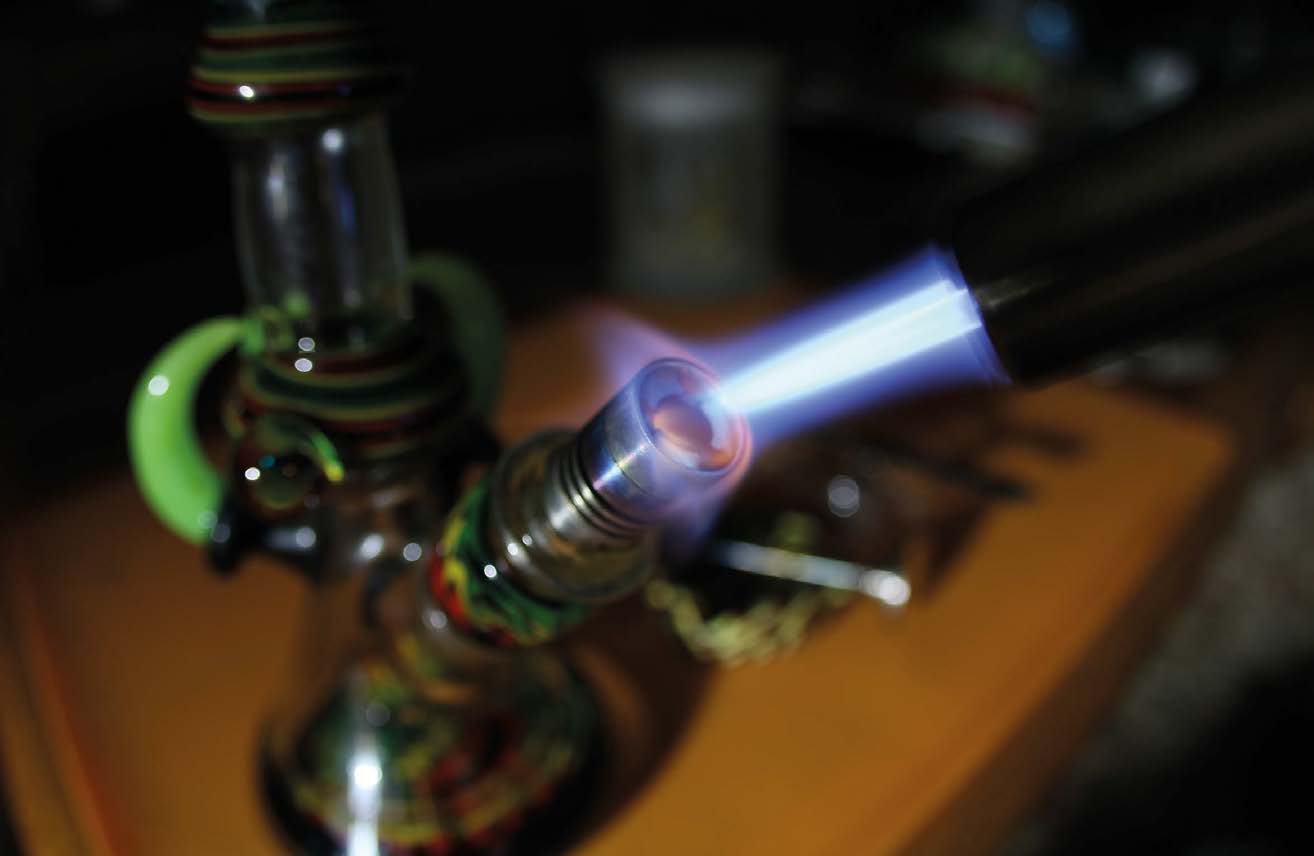 IT IS TYPICAL RAINY AFTERNOON IN THE PACIFIC NORTH WEST AS WE PULL UP TO THE BARN AND TALK TO KEN, THE MASTERMIND BEHIND HAPPY DADDY PRODUCTS.

Ken was a blacksmith turned Zen master dab toolmaker. We’re here today to talk to him about his new Genesis nail.

Dark clouds fill the sky and rain bounces off the windows as we’re hanging out at the table enjoying some of the tastiest concentrates from the west coast. Ken tells us about how much research he conducted before venturing into this project, and he describes his reasoning from the head of the nail down.

The first thing you notice about the head is the bucket. It will hold an entire gram of concentrates. It also has three ports leading off of it; you can see the lines as Ken points to them in the center. Oil will crawl all the way up to these ports, about 1/16th of an inch below the top of the bowl. The phenomenon of crawling oil is explained by the cancola (SP?) effect; whenever oil heats, it wants to climb vertically. This is really great if you’re using a wok to cook with, because it means oil gets to all your vegetables, but it’s not so great if you’re losing product from your nail. To counteract this, the Genesis doesn’t have a curved bottom, and it’s really deep, so the oil won’t escape.

The compartment is slightly over ó inch in diameter and about 3/8 inch deep, so this is a very large pocket. The head is also very thick, about four times thicker than any other competitor on the market in regards to how much titanium they use. “And that’s really important,” Ken says, “because unlike a normal nail we are trying to heat up and get red hot, here we are only trying to get into the temperature range that we like to smoke at.” The nail has enough of a heat sink to retain heat for two minutes, which means that you as a smoker are able to determine what temperature range you like vaping. “You learn how many the seconds to count when you hit [the Genesis] with the torch. When you do hit these, heat them in the middle,” he points out helpfully. He counts the seconds he holds the torch to the nail, hitting the center of the pocket. “20 seconds,” he says. “You can see I’m not going to get this at all red—nothing,” Ken says, bringing the Genesis closer to show me. “By hitting the middle of the pocket, we’re not wasting heat, and we’re also not oxidizing our titanium.”

Titanium is meant to be heated to 1000°F at a constant rate. At about 1200°F and above titanium begins to change color, which allows oxygen into the surface, or begins oxidizing the metal. Every time this process occurs, the titanium becomes less and less efficient at holding heat. Titanium is already bad at holding heat, and with a lot of oxidizing it will hardly hold any heat at all.

“With this nail—even with hundreds of heats—,” and it’s easy to see Ken is very thorough about the testing process, ”it’s so thick that it’s not going to oxidize. You’re never going to get it so hot that you’re getting it to an orange or red where you’re introducing oxygen into the titanium material.” What does this all mean? For the folks at Happy Daddy it means that the Genesis is designed to run at 1000° F constant forever. Ken says to us that this nail will last for years and years and years because you’re not oxidizing it—you’re not wearing the nail out.

Some of the technology built into the head of the nail is actually on the bottom of it. The Genesis has a self-cleaning head. Ken explains to us how it works. “As the oil travels this path, it sticks to the top of our surface, which is one of our patents. We call it a minimal reclaim head. As the oil stick the surface, you draw in any oil that falls down the hole and it turns to vapor on the next hit. Basically, you’re smoking everything instead of wasting your dollars.”

In addition to the self-cleaning feature, you’re able to take apart the Genesis and give it a full cleaning when it needs it. If the head ever sticks, Ken suggests throwing the whole nail in some alcohol over night. Sometimes there’s carbon build up, and you can tap it on a plastic cutting board and it should come apart just like before.

The Genesis is E-nail adaptable, and adapters are available in 16mm and 20mm. New flat coil adapters are coming, so you can use any kind of adapter. All you do is take your E-nail adapter, put it in between your heat sink and the head, and now you’re E-nail capable.

The Genesis is designed from top to bottom. There’s no need for any type of adapter—male or female— between 14mm and 18mm. “One of the great things about this design is we really took it from users. The fact is that you can have expensive glass get broken with taper lock issues, so we really engineered this so you wouldn’t get any reverse taper locks in the female joints. And here when we go to the male joint,” Ken says as he unscrews the bottom, turns it, and then screws it back into place, “all of them rest on the lip rather than in the taper so that when you heat it up—even after it has been sitting on there cold—you can pick it up. It’s not going to stick to the device. We also tested the bottom of the heat sink. It doesn’t go above 300 degrees, so that, again, the Boro farm glass piece over a duration of time is not injured.”

One of the most innovative things about the Genesis is its ability to sublimate. Sublimation, for those of you who aren’t chemistry whizzes or insanely interested in the process like Ken, is when a substance goes straight from a solid to gaseous state without passing through the liquid state. Ken explains how important this process is to get the best flavor. “We came up with an integrated way to smoke, so that we could get the very best flavor, and, most importantly, get every drop of medication. So how do we do that? Well we created a nail that actually sublimates—we enrich the vapor so that the vapor content is super heavy. When you talk about the melt looking frothy from huge BHO hits,” he says, referring to our earlier observations, “that’s what we’re talking about. By using our cap, which has three different holes in it, cold air shoots right into the middle. You’ll notice [the Genesis] has small holes in each chamber, which acts as a choke. It covers the big holes, and only allows a restricted flow so that everything in the chamber is getting burnt. Cold air is directed into the hot chamber, and that air circulates, which means we get a vaporization effect. That’s why this nail is so good with hash, and you can even smoke flower with it.”

And just in case you didn’t think something this exhaustively designed could possibly be cute, you should see the Micro-Genesis. It’s guided by the same philosophy; it’s just smaller, fitting a 10mm male and 14mm female. It has the same sublimation head and is available with quartz inserts, just like the Genesis.

After a few weeks of testing the genesis nail in both size I can attest to the extensive testing and research Ken and the crew at Happy Daddy Products has done, the nail transfers the flavors of any concentrate that enters the Happy Daddy titanium coliseum. I also gave a 10/14mm Genesis nail to my glass blowers pals – Donrob and Jared Delong up at the Lost Coast gallery in Humboldt to check out, both of them we raving about the performance and design of Happy Daddy Genesis nail they used on various pieces they have hanging around the shop.

Happy Daddy Products was started just outside Portland, Oregon. They started out making free medical marijuana cleaning tools for patients three years ago this January. Ken, also known as Happy Daddy, worked in corporate America for twentyfive years before following his passions and becoming a blacksmith. Once he created the Pipe Pal, he never looked back. Ken’s been designing, creating, and testing his made in Oregon products ever since. He can frequently be heard saying he has the best job ever.

Happy Daddy products can be found at: www.happydaddyproducts.com