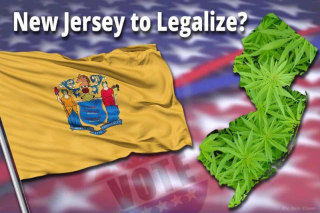 Full adult-use marijuana legalization has a strong winning record when the issue has been taken directly to voters via ballot initiative.  This reform has proven much more difficult through the traditional legislative process, with only Vermont able to pass a limited (non-commercialized) version of reform this way.  Today, after lots of debate in the state, New Jersey proved yet again how challenging this can be as detailed in this local story headlined “Legal weed won’t happen right now in N.J. Lawmakers call off big vote.”  Here are the basics:

Leaders of the state Legislature have canceled a planned vote Monday on a bill that would legalize recreational marijuana for adults 21 and older in New Jersey, state Senate President Stephen Sweeney is set to announce.

“While we are all disappointed that we did not secure enough votes to ensure legislative approval of the adult use cannabis bill today, we made substantial progress on a plan that would make significant changes in social policy,” Sweeney, New Jersey’s top state lawmaker, said in a statement provided to NJ Advance Media. Sweeney. D-Gloucester, added that the “fight is not over.”

It’s expected that lawmakers will schedule another vote this year, but it’s unclear when that will happen. “We need to learn from this experience and continue to move forward,” Sweeney said.” While this legislation is not advancing today, I remain committed to its passage.”

The vote fell apart after Gov. Phil Murphy and fellow Democratic state leaders spent more than a week feverishly trying to wrangle enough votes in the Democratic-controlled Legislature to pass the Democratic-sponsored measure. But top lawmakers said they wouldn’t hold the vote if they weren’t guaranteed to have both the 21 votes they need in the state Senate and the 41 they need in the state Assembly. As of Monday afternoon, multiple sources said, there were only 17 or 18 members of the Senate who would vote yes. But that still left leaders a few votes short….

Sweeney said earlier this year said he wouldn’t schedule another vote until after the November elections at the earliest. If they can’t get enough votes by then, it’s possible leaders could opt for asking New Jersey voters to decide in a ballot referendum next year whether to legalize weed.

The crumbling of Monday’s vote is a tough pill for Murphy, who made legalizing marijuana a key plank in his platform when he won election in 2017. He and top Democratic lawmakers have been hoping for more than a year to have New Jersey join 10 other states and Washington, D.C., that have legalized pot. But they prefer to become only the second state to do it legislatively, rather than through a ballot referendum.

Monday’s development also postpones two other measures tied to the bill: one that would expand the state’s oft-criticized medial marijuana program and another that would expunge thousands of pot convictions in the state. Murphy has said his administration will now move to dramatically increase the number of licenses for cultivators of medical marijuana as a backup plan.

Murphy and proponents of legal pot say the goal of legalization is to increase tax revenue for the state, create a brand new industry, and improve social justice because black people are three times more likely to be arrested on pot charges than whites. Recent polls have found a majority of New Jerseyans support legal pot. But many lawmakers — Democratic and Republican — have been leery, saying it could erode public safety, lead people to try more dangerous drugs, and damage communities of color.