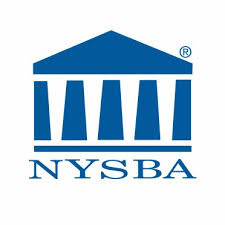 As reported in this press release, last week the New York State Bar Association (NYSBA) “approved a report from the NYSBA Committee on Cannabis Law that supports the legalization of adult recreational marijuana use in New York.” Here is more:

The report outlines suggested strategies for the implementation of legalized cannabis in New York State, and was adopted at NYSBA’s House of Delegates meeting in New York City Jan. 31 as part of the association’s Annual Meeting.

“With the full support of the New York State Bar Association, we are hopeful our report will offer the necessary guidance to New York’s governing bodies as they consider the legalization of adult use cannabis,” said Aleece Burgio (Barclay Damon), who co-chairs the committee with Brian J. Malkin (Arent Fox) and presented the report to the House of Delegates.

“The report provides the necessary details surrounding safety, research, social equity, taxation, and other principles critical to the success of a legalized adult use program in this state,” continued Burgio. “While policy continues to evolve at the federal level, the committee also believes the most effective way to navigate this complex issue is for any comprehensive cannabis proposal to include hemp, medical marijuana and adult use.”

In its detailed 23-page report [available here], the committee said it was not aware of a single jurisdiction that has passed model cannabis regulation and legalized adult-use that would be appropriate for New York to adopt in total.

However, the committee noted that the nonprofit, nonpartisan RAND Corporation has been commissioned by several state legislatures for comprehensive advice and analysis prior to developing their legalized cannabis use legislation and believes New York would similarly benefit by commissioning RAND or a similar organization to conduct such a study or analysis.

The report also recommends that any New York legalized marijuana use legislation include:

Oregon Psilocybin: Does Measure 109 Go Far Enough? Does it Go Too Far?

Even though Detroit finally has a recreational marijuana ordinance, the fight is still far from over