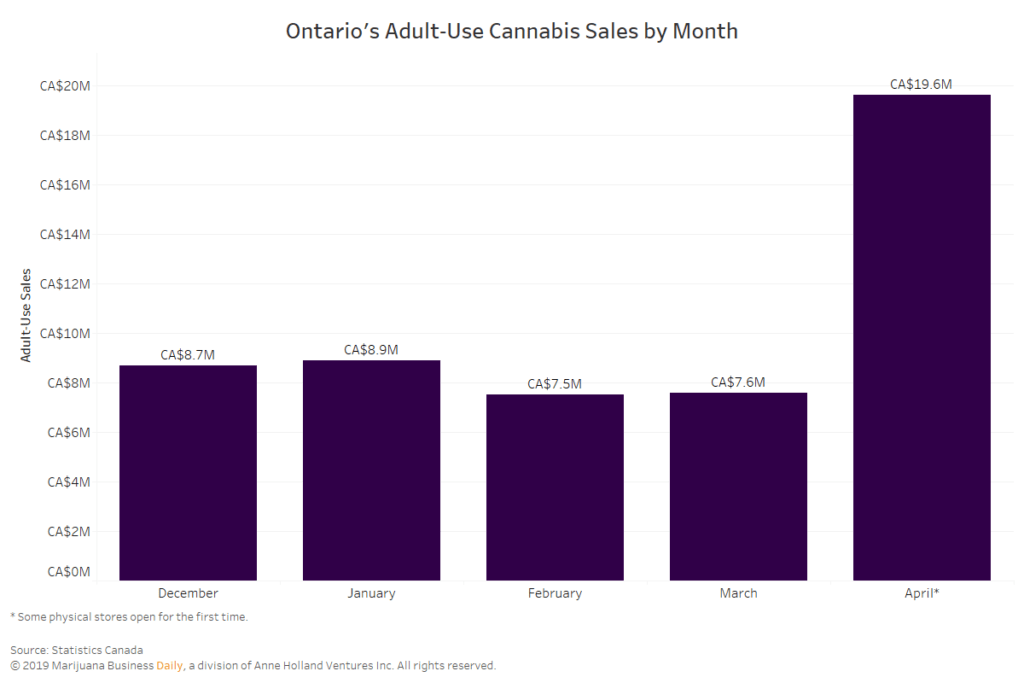 Adult-use cannabis sales in Canada’s largest consumer market more than doubled in April on the back of new store openings, representing “powerful evidence” of pent-up demand for regulated marijuana after months of stagnation, according to experts.

Receipts of recreational-use cannabis products in Ontario totaled 19.6 million Canadian dollars ($15.1 million) in the month, recent data from Statistics Canada shows, up from CA$7.6 in March and CA$7.5 million in February.

April’s receipts consider the first monthly sales at fewer than two-dozen physical stores in the province.

“This is remarkable given only a handful of stores in Ontario opened on the April 1 inauguration date,” Chris Damas, editor of BCMI Cannabis Report, said in a note to investors.

Damas expects sales in the province to climb in May and June before leveling off after Ontario’s 25-store cap is reached.

“I would imagine May and June are going to show additional gains in Ontario cannabis sales but more moderate after the initial store-opening publicity-fueled excitement,” he told Marijuana Business Daily.

“The Ontario April sales numbers are powerful evidence that there is significant pent-up demand for cannabis, in spite of the existence of the provincial online store.”

Ontario’s 25-store limit contrasts with Alberta’s approach, which has a plan to get to over 200 cannabis stores this year.

Ontario’s recently-fired finance minister had committed to an open allocation of licences beyond the 25 storefronts “once we have certainty surrounding the federally regulated cannabis supply.”

It is not known whether the new minister shares the same approach.

The ministry did not immediately reply to a query from MJBizDaily.

“Ontario should increase the number of stores as quickly as possible to take advantage of this unmet demand to help eradicate the illicit shops that are still abundant in major metropolitan areas,” Damas said.

The OCS is broadly viewed to have bungled the rollout of its monopoly online store and still does not offer consumers in Canada’s largest city same-day delivery.

“As a result many consumers initially stuck with the illicit market,” Khan said.

“The rollout of retail storefronts has helped to bring more consumers into the legal market. This trend should continue if Ontario moves back to merit based open licensing, especially since the national supply situation appears to be improving,” he said.

Across Canada, consumers purchased CA$74.6 million of cannabis products through regulated retailers in April, according to the Statistics Canada data. That’s an increase of 22% from the previous month.

Ontario accounted for 87% of that growth.

Sales generally leveled off in provinces that did not open new stores in April, such as Quebec (CA$13.5 in sales) and New Brunswick (CA$2.8 in sales).

Consumers in British Columbia continue to show little appetite for regulated cannabis. Sales there declined to only CA$2.5 in the month.

The Statistics Canada data is not seasonally adjusted.

Matt Lamers can be reached at [email protected]