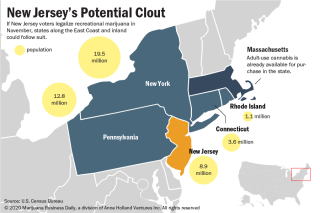 New Jersey voters intend to approve legalizing marijuana on Election Day by a ratio of 2 to 1, according to a poll released Friday by Fairleigh Dickinson University. A question on the Nov. 3 ballot asks voters: “Do you approve amending the Constitution to legalize a controlled form of marijuana called ‘cannabis’?”

If adopted, it’s unlikely that marijuana will be available for sale any time soon. State legislators still will have to write regulations to govern the cannabis market, a process that could take up to two years….

Democrats are the biggest proponents of legalization with 71% of those surveyed giving it their support. Republicans gave the measure more tepid backing — 52% are for it, with 40% against….

Industry experts say that marijuana in New Jersey could become a $2 billion market by 2024 and generate about $126 million in tax revenue annually.

Previous polls of New Jersey voters on the issue have been conducted by groups associated with the marijuana industry such as NORML or law firms that represent cannabis businesses. Fairleigh Dickinson’s is notable for its lack of industry ties. “Public opinion on this issue has evolved considerably,” said Krista Jenkins, the poll director and professor of politics and government at Fairleigh Dickinson University in Madison, N.J. “It’s a pretty big jump.”

“Just a few years ago, in 2018, we asked about recreational marijuana legalization and found support that was well beneath a majority, let alone anything that approached the support we’re seeing today,” she said. “Back then, 42% supported what is being proposed today. The legislative maneuver to give voters the say looks like it will wind up with a decisive pro-pot outcome.”

This Marijuana Business Daily article, headlined “Adult-use marijuana legalization in New Jersey expected to ignite domino effect,” discusses how legalization in the Garden State might lead legislatures in neighboring states to move forward with legalization plans.  But even if that does not happen right away, New Jersey could functionally serve as a huge legalization hub for massive cities like New York City and Philadelphia (and even smaller cities like Baltimore).  New Jersey alone would become the fourth largest legalization state by population (behind California, Illinois and Michigan), but the nearby big cities should serve to make the Garden State the second largest overall legal market behind only California (and it might become the most significant market given its proximity to the NYC media).