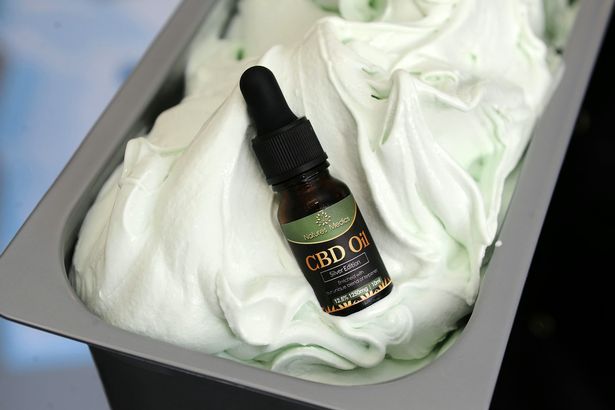 Kyle, 28, said the idea came about six-months-ago after hearing the oil is thought to help people with conditions such as anxiety, depression, insomnia and epilepsy. Kyle has produced the product in partnership with Elaine Grant from Natures Medics.

Elaine said she was “thrilled” when Kyle approached her to supply products to be used to make CBD ice cream.

“He had apparently been recommended me by quite a few different people which was very flattering and I knew this was something I wanted to be involved in straight away.”

Twenty-eight-year-old entrepreneur Kyle only recently began selling the aptly-coloured green CBD oil ice cream, priced at £2.50 a scoop and is already struggling to keep up with demand.

“When I first thought of the idea I didn’t think CBD oil had a lot of public acceptance. But I think now with so many conditions going about, I believe this is the right time to have it in our ice-cream. Word spread pretty quickly and it ran out almost straight away. The feedback I’ve had from customers is that they were surprised to find that it actually tastes delicious despite the fact you can tell it has the oil in it too.

“Every scoop of the ice-cream has your daily dosage in it, which is about three drops of the oil.

“Mixing the vanilla homemade ice cream with the oil helps it a bit and I think it is much easier to consume.

“I could have easily hidden it in raspberry or strawberry flavoured ice cream or something like that.

“But I wanted it to actually taste like what it was so I’ve mixed it with my own vanilla recipe and it has a bit of an earthy taste but is really creamy too.

“I quite like it. I believe I am the first guy in Britain to do this.

“I really do believe in the health benefits of the CBD oil.”

Elaine, from Natures Medics in Falkirk, is a passionate advocate of the health benefits of CBD oil which is believed to relieve chronic pain and inflammation. It is also widely thought to be useful in treating cancer but this has not been scientifically proven.

Elaine said: “I’ve seen first hand the benefits it can have as I believe it helped my mum who has arthritis and COPD and also my son who has autoimmune disease.

“The feedback has been amazing with everyone saying it tastes fantastic and the fact it sold out on day one says it all. I’m really proud to have been involved in this project and for us to have launched the first CBD oil-infused ice cream in the country.

“I know Ben and Jerry’s are trying to do this too but I’ve managed to beat them because my shop is much smaller.”