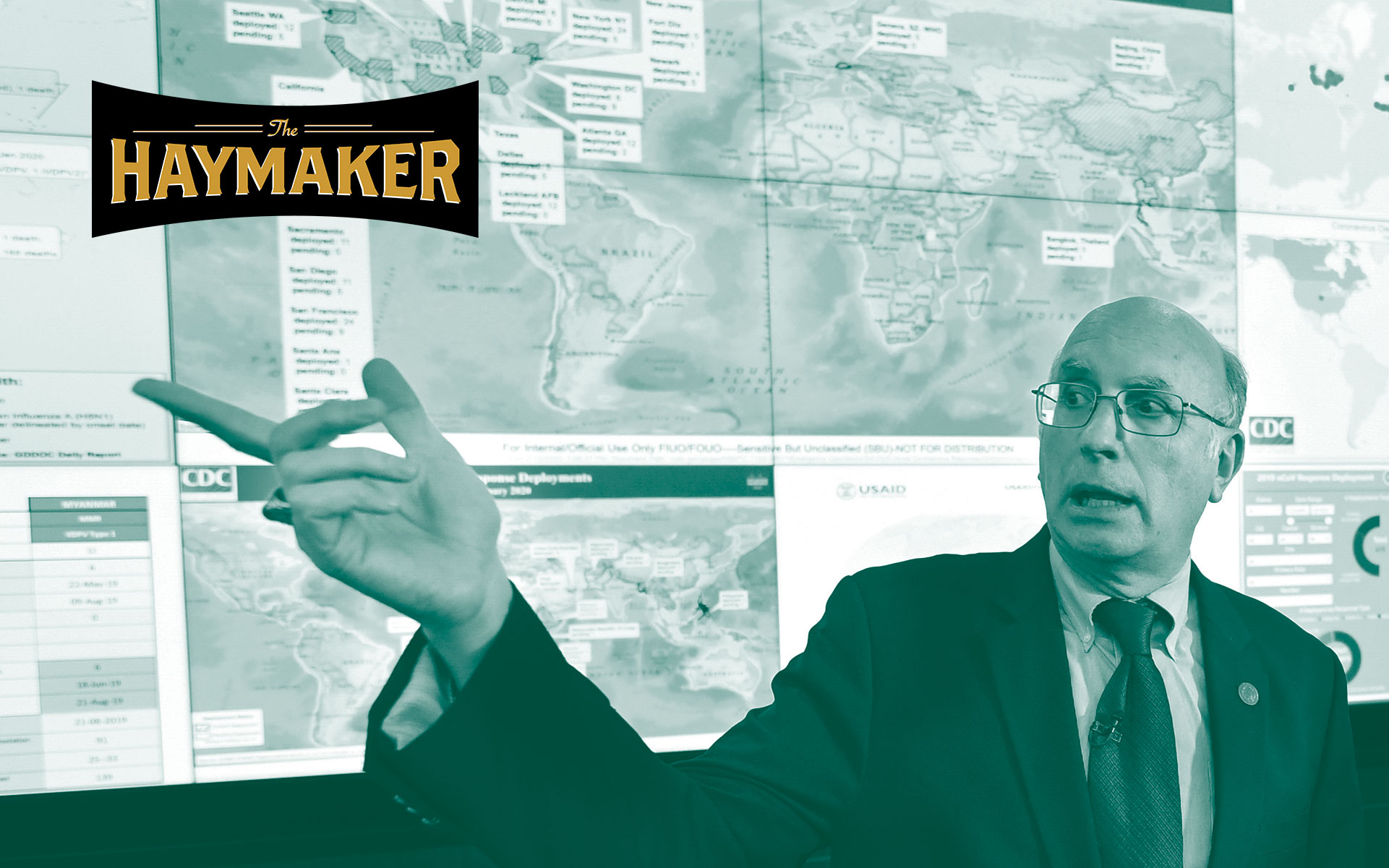 Jay Butler, Deputy Director for Infectious Diseases at the Centers for Disease Control and Prevention (CDC), speaks to the media about COVID-19, the novel coronavirus, inside the CDC’s Emergency Operations Center, Thursday, Feb. 13, 2020, in Atlanta. (AP Photo/John Amis)

mericans woke up this week to the startling realization that the US Centers for Disease Control and Prevention, once the global gold standard in medical science, has been reduced to a gaggle of bungling bureaucrats.

The agency’s glaring failures amid the novel coronavirus outbreak have been shocking. They’re already resulting in needless suffering and death. The CDC, once a source of national pride, is now a late-night comedy punch line.

As CDC Director Robert Redfield testifies before a Congressional committee this morning, consider this: To those of us in the cannabis world, the CDC’s meltdown in the COVID-19 crisis comes as no surprise. We witnessed a preview of the agency’s incompetence during the VAPI (Vaping-Associated Pulmonary Injury, also called EVALI) outbreak of 2019.

VAPI was a preview of COVID-19

Over the past few weeks the world has watched CDC officials issue faulty COVID-19 test kits to American clinics, and then leave those same clinics with no tests at all. As we saw South Korea ramp up nationwide drive-through coronavirus checkpoints, and Germany produce a lab assay endorsed by the World Health Organization, Americans have been left to wonder: Where are our coronavirus tests?

CDC officials aren’t merely failing to manufacture their own tests. Leaders at the Atlanta-based agency, along with their counterparts at the FDA, have actively been blocking other American labs and scientists from developing and administering their own tests. Why?

CDC officials have yet to offer an answer, so we’re left to assume the obvious: Trump-modeled arrogance. Either CDC and FDA officials don’t trust the work of foreigners, or they’re embarrassed to own up to their own inability to create a test. Maybe both.

There’s a third option, too. A widely available test will raise the number of confirmed COVID-19 cases in the United States, which President Trump fears will further tank the stock market and his own re-election chances. Two weeks ago he assured a worried nation that “within a couple of days” the 15 confirmed American COVID-19 cases “is going to be down to close to zero. That’s a pretty good job we’ve done.”

Uninformed, reckless predictions like that tend to reach the ears of Trump appointees as marching orders. Two weeks earlier, the White House began filling out a ‘purge list’ of appointees deemed insufficiently loyal to the president. The message could not have been clearer: Heed Trump or hit the bricks.

In the cannabis world, we’ve seen this movie before.

In 2019, as the VAPI lung crisis spread across America, CDC officials for months clung to a theory that nicotine vaping was to blame. Even as Leafly’s early reporting showed otherwise, CDC leaders held out for months before finally admitting that illegal THC vape cartridges tainted with vitamin E acetate—and not nicotine vaping—was the cause of the outbreak.

It was as if CDC officials wanted nicotine vaping to be the cause. They may have been responding to signals from the top.

In mid-September, President Trump and First Lady Melania Trump, along with Health and Human Services Secretary Alex Azar (who oversees both the CDC and the FDA), used the VAPI outbreak to promote their forthcoming “strong recommendations” to ban all flavored nicotine vaping products. Azar had been agitating for just such an action for more than a year. VAPI gave him the political cover to do so.

No VAPI cases in the UK. How come?

During that VAPI crisis, as we’re seeing now with COVID-19, top federal officials refused to consider any information that originated outside the borders of the United States. While Americans were suffocating and dying from VAPI, nicotine vapers suffered no such symptoms in the United Kingdom. None.

That data alone should have spurred an obvious thought: Maybe it’s not the nicotine vapor. Instead Trump, Azar, and CDC officials doubled down on nicotine, spurring several governors to order emergency vaping bans and send millions of vapers back to their Marlboros and, of course, lung cancer.

In early 2020, Trump unexpectedly reversed course on the flavored vape ban. “I never should have done this vaping thing,” he complained to Azar. What changed? Data—but not the medical kind. Trump’s about-face happened when his political people showed him polls indicating how poorly a nicotine vape ban would play with his base.

You won’t hear any of that from officials at the CDC or the FDA, of course. As far as they’re concerned, Public Health England lacks credibility. Despite, you know, quaint little institutions like Oxford, Cambridge, the LSE, The Lancet, and the world’s oldest independent scientific academy. England—you remember, it’s that island where epidemiology was invented.

Trump appointees serving the boss, not the people

Aside from Trump, there are two common actors in both health emergencies: HHS Secretary Alex Azar and CDC Director Robert Redfield. During last year’s VAPI outbreak, Leafly and most other media outlets assumed only the best intentions on their behalf. Surely, we thought, Azar and Redfield would follow the scientific evidence and do the right thing.

Today, in the midst of the COVID-19 pandemic, I’m rethinking that assumption. At Trump’s infamous stop at CDC headquarters last week, the president called Director Redfield to the mic for a dollop of Dear Leader praise. “Do you have something to say?” Trump said, as would a teacher to a student forced to apologize to the entire class.

“Well, first I want to thank you for your decisive leadership,” Redfield replied, executing a professional-grade knee bend. Then Azar and Redfield stood by silently while the president blurted out buckets of medical nonsense that misinformed hundreds of millions of Americans. The result is terrifying. As the virus expands across America, making a show of shaking hands has become a symbol of one’s Trumpian loyalty: Spreading coronavirus to own the libs.

Destroying the NASA of medicine

It took the Centers for Disease Control and Prevention decades to build up its reputation as a global leader in public health. It’s been one of those special federal government agencies staffed by dedicated career scientists, places like NASA or the US Geological Survey, whose very name stood for scientific integrity. But not anymore.

Some of us in the cannabis world thought the CDC’s handling of the VAPI crisis was a one-off bungle. It turns out we were wrong. VAPI was merely the opening act for the main event: the CDC’s catastrophic failure in the face of COVID-19.

Leafly Senior Editor Bruce Barcott oversees news, investigations, and feature projects. He is a Guggenheim Fellow and author of Weed the People: The Future of Legal Marijuana in America.