I’m following a man named Fire through the jungle. He stops where a small footpath branches off the main trail and points out a Pimento tree, which I know as allspice. For Jamaicans, the tree’s unripe berries are a fundamental element in jerk sauces. A proper jerk preparation also cooks over Pimento wood for additional seasoning.

“I’ve lived away from the system for 37 years,” says Fire, as we start switchbacking our way up the mountainside. At age 18, he embraced an off-the-grid DIY lifestyle and began homesteading in the remote outback outside of Negril, Jamaica. He grows his own ital food, cooks over an open fire, and collects rain to water his crops.

I’m on a tour of sorts—however small and informal—that includes lunch, so he lights a fire in his open-air kitchen and begins to boil some yams and chop herbs. A friend brings a small burlap sack full of a local landrace sativa, grown organically and still on the stalk.

I came here hoping to experience the local cannabis culture in transition from prohibition to legalization. These buds tell a story that goes back even further.

Possession of up to two ounces of cannabis is now decriminalized in Jamaica. As of March 2019, the island has three fully licensed cannabis stores—Kaya Herb House in Ocho Rios, Epican outside of Kingston, and Island Strains in Montego Bay (just minutes from the airport).

But at $10 per gram on average, you’ll be paying a premium compared to what you can find from more informal suppliers, plus you’ll need to either bring proof that you’re a legit medical cannabis patient where you live or get a quickie medical recommendation in the country.

While 15 years ago scoring some cannabis in Jamaica might have involved a hasty exchange with a stranger on the beach, now it’s a fairly relaxed and open affair. Negril has a number of “sacramental use” retailers and on-site consumption lounges, which seem to operate in a grey area.

My favorite is located on a cliffside right next door to Negril hotspot Rick’s Cafe, so you can enjoy the same legendary sunset view and live bands nightly while smoking a spliff and avoiding the crowds. Or you can simply make a weed friendly pal among the locals or ask someone trustworthy at the place where you’re staying to put you in touch with a reputable supplier.

The purpose of travel is to experience something new that’s authentically connected to the place you’ve come to visit.

Finding good cannabis in Jamaica isn’t hard. But as I came to discover over the next week, the island’s old school sativa strains (like Lamb’s Bread) are increasingly going out of favor with many of Jamaica’s growers, who now prefer modern hybrid varietals imported from California—as they tend to fetch a premium. I was offered everything from Lemon Skunk to Larry OG.

The purpose of travel, however, is to experience something new that’s authentically connected to the place you’ve come to visit. So if you want to smoke the actual herb that made Jamaica famous, you’ll have to specifically seek it out. I think you’ll find it’s worth the effort, because while picking out seeds may sound like a chore, it’s actually quite relaxing if you’ve got the time and inclination.

Fire is a practitioner of Rastafari, an Afrocentric religion that took root in Jamaica in the 1930s and rejects the idea of central authority, leaving room for different interpretations of biblical scripture and diverse customs. So it’s hard to make generalizations about the faith or its adherents.

But it is safe to say that a large majority of Rastafarians consider cannabis to be a sacrament, revered for its beneficial medicinal properties and ability to engender and enhance spiritual connection.

Fire and his friends don’t sell cannabis but freely share a bit of their stash. He rolls up a spliff the size of a small carrot and hands it to me.

Local custom dictates that each person smokes their own, so I puff away intermittently as we talk about everything from the meaning of life to how a US invasion of Venezuela would affect fuel prices in Jamaica.

Fire advises leaving the stress and worry of late stage capitalism behind and becoming self-sufficient. Gazing out over the jungle, and smelling his simmering curry sauce on a faint breeze, I’m hard-pressed to argue. Though the ease of the moment belies all the hard work that’s gone into making this oasis away from spreadsheets and hyperlinks.

Food and weed bring people together like nothing else I know.

Lunch is yam, plantains, pumpkin, and TVP (texturized vegetable protein) seasoned with a variety of wild herbs like Jamaican thyme, bird pepper, and wild basil. I’m struck by the depth of flavor and vivacity of their produce. And same goes for the ganja.

Food and weed bring people together like nothing else I know. Cannabis and cuisine is also the exact intersection where you’ll find Zimbali Culinary Retreats, a food-focused, weed-friendly eco-retreat and small farm.

My walking tour to Fire’s place departed from Zimbali, where I stayed three nights before heading to the coast. On the last night, my wife, Elise McDonough, was booked to cook a five-course cannabis-infused dinner in collaboration with the retreat’s talented kitchen staff, who’ve earned the distinction of being Trip Advisor’s top rated restaurant in Jamaica.

To be clear, this was a special occasion, and Zimbali does not regularly offer cannabis-infused food. But they’re definitely ready to hook you up with some rolling papers, an ashtray, and a hammock if you want to light up. 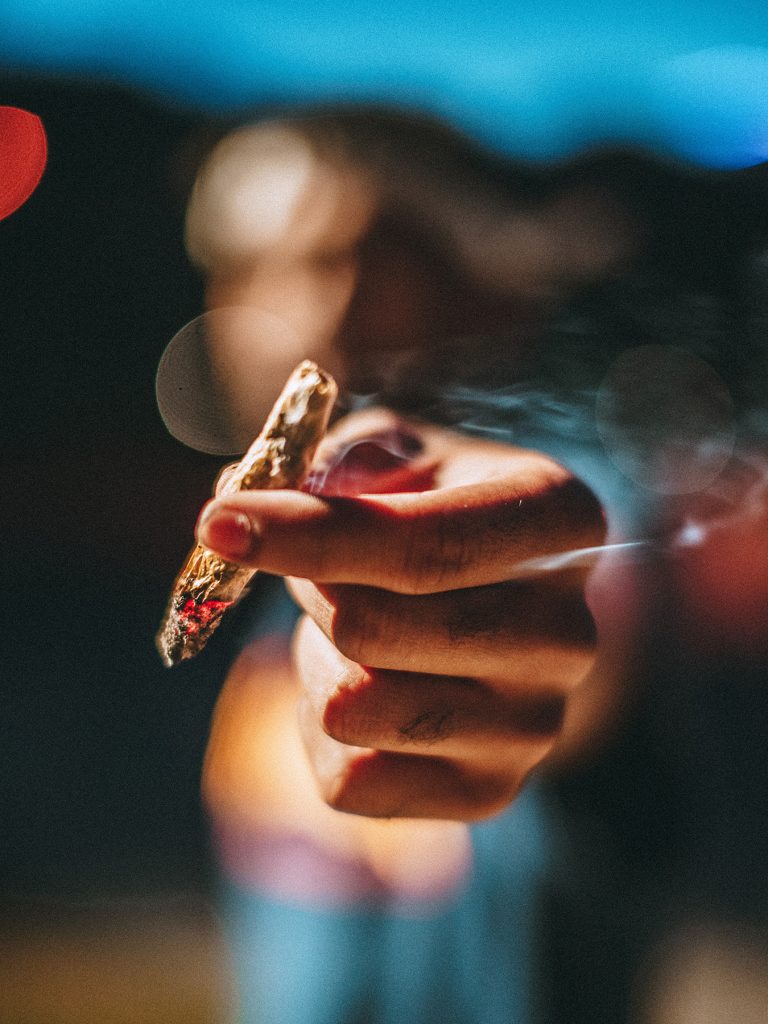 In the near future, they’ll be home to a legal cannabis cultivation site called “Yardie Farma” that will begin with 12,000 square feet of greenhouses and two acres of full sun-grown cannabis.

After dinner, Zimbali presents an evening of traditional African drumming, with Fire himself keeping the rhythm.

‘The Humboldt County of Jamaica’

Cannabis culture in Jamaica long predates the Rastafari movement. In the wake of a successful slave rebellion in 1838, local plantation owners started shipping in indentured servants from East India, who brought seeds for a medicinal plant they called “ganja”—Sanskrit for “hemp” or “hemp resin.” Eighty years later, Jamaica boasts one of the oldest cannabis cultivation traditions west of Morocco.

Ask anybody where the most herb-friendly part of modern-day Jamaica is and they’ll likely direct you to Negril, and with good reason. Until the 1960s, Negril was largely cut off geographically from the rest of Jamaica, its beaches beautiful and unspoiled.

A local once described Little Bay to me as ‘the Humboldt County of Jamaica’—a beautiful place with rugged terrain where growing cannabis is an integral part of everyday life.

That’s a long-lost dream compared to the endless row of tourist traps that now line Negril’s world-famous seven-mile beach. But what if I told you there’s a sleepy little town just a little ways down the coast where you can experience a taste of how things used to be?

A local once described Little Bay to me as “the Humboldt County of Jamaica”—a beautiful place with rugged terrain where growing cannabis is an integral part of everyday life. Certainly not everyone in the community takes part, directly or indirectly, but it’s definitely a place where the plant is widely celebrated and generates a significant amount of revenue, rivaled only by tourism.

And just like in Humboldt County, legalization has brought both opportunity and concern to Little Bay, as an end to criminalization and money-making opportunities via legalization are weighed against well-founded fears of a big business takeover.

The shuttle ride from Zimbali to Little Bay only takes about twenty-five minutes, much of it over bumpy backroads en route to Coral Cove. The small resort stretches out over five oceanside acres, but capacity maxes out at just 45 guests, so even in high season there’s plenty of room to enjoy a stunning Caribbean coastline that includes a protected eddy for swimming, snorkeling, and sea kayaking. Just bring protective footwear to protect against sharp coral and sea urchins.

Speaking of high season, Coral Cove has been weed friendly since it first opened nearly twenty years ago, and now they have a couple of small on-site greenhouses that steadily produce a wide variety of great strains, all grown in cooperation with the Bobo Shanti Rastafari sect, who enjoy a religious-use right to cultivate, affirmed by the Jamaican government. There are also plans in place for it to become a center of cannabis research and community outreach.

The kind and friendly staff can help arrange everything from coastal tours and deep sea fishing to day trip excursions into Negril or any other popular destination on the island.

Just a mile or so down the road from Coral Cove, the locally-owned and operated Blue Hole is a literal oasis centered around a 35-foot-deep mineral spring at the bottom of large natural cavern of karst limestone.

Jump from the top if you dare or watch locals perform acrobatic somersault dives. Either way, the water is amazingly refreshing and cool on the hottest day, with naturally occurring minerals said to provide therapeutic benefits. There’s also a pool (fed with the same pure spring water), a bar, a ping-pong table, and a steady thumping reggae soundtrack.

The Blue Hole costs just $10 to get in and is open late, plus there are accommodations if you want to stay on the property, which boasts some beautiful views. Blue Hole owner Wabu is also deeply connected to the local cannabis scene, and can set you on a hiking tour through the jungle to visit cannabis cultivators at work in the surrounding hillsides. Or just post up poolside, roll up a spliff, and no doubt, you’ll quickly make some new friends.

On our last night at Coral Cove before heading back to Babylon, my wife and I inquired about a nearby place to find authentic Jamaican food. Our party of four was offered a joint before dinner while we downed cold Red Stripes, and we had steaming mugs of weed tea after dinner, steeped with the leaves of male plants, so it provided therapeutic benefits without the worry of getting too high.

In between these herbal aperitifs and digestifs, we enjoyed an expertly prepared classic Jamaican meal: fresh-caught pan-fried snapper served whole, in a escovitch sauce with sautéed peppers, tomatoes, plantains, and a medley of root vegetables, cooked over a small wood fire.

Sitting around a rustic wooden table next to a small friendly local bar in the tropical style, close enough to the ocean to hear the waves crashing when they switched the reggae station from roots to dancehall, we once again reached that sweet spot where food, cannabis, and culture all come together.

I wish I was sitting there right now.