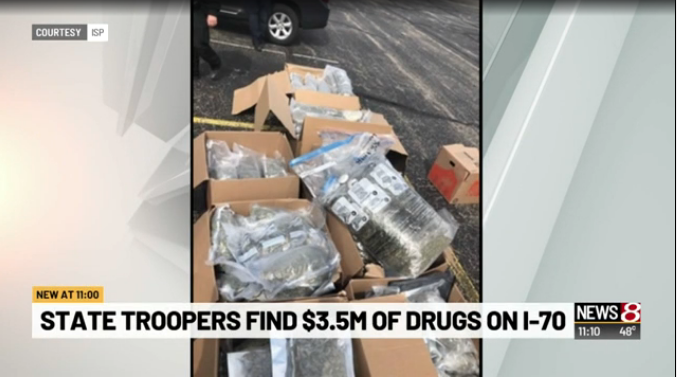 There’s always someone who wants to emulate a little George Jung, the character portrayed by Johnny Depp in the hit movie “Blow,” who rose to fame by dealing marijuana from Mexico and later moving on to cocaine from Colombia, dealing with none other than the biggest drug lord in the world, Pablo Escobar.  Today’s drug bust is about two Indianapolis men who made their way to jail thanks to being pulled over with about $3.5 million worth of THC-filled vape cartridges as well as marijuana in the flower form.

The two men, both 27 years of age, were coming back from Burbank, California, heading east on Interstate 70 by the State Road 267 when they were pulled over by a trooper because they were following the trooper too closely, according to state police and story I read on Wish Tv.  The men’s names are Danny Luttrell and Brandon Pierson.  They hail from Indianapolis and were heading back there, presumably.

Luttrell was driving the truck while Pierson was in the passenger side when they were pulled over.  The trooper sensed the aroma as well as some “criminal indicators,” (whatever that means.)  When the truck was searched, they found 250 pounds of marijuana, which had a street value estimated at $2.5 million.  They also confiscated another 50,000 vape cartridges filled with THC, (that snap onto vape pens like these) which was valued at about $1 million.  The two men were brought to Hendricks County Jail and charged with level 5 felonies for dealing marijuana.

After a conversation with driver Luttrell and passenger Pierson, the trooper noticed “criminal indicators” and aroma. A search of the box truck’s cargo storage area revealed roughly 250 pounds of marijuana, worth an estimated $2.5 million, and 50,000 THC-containing vape cartridges, worth an estimated $1 million, the release said.

Usually these big busts happen in larger states, like Florida or California.  These two men have some serious balls on them, driving from California to Indiana with that much weed and TCH pens.  I’ll keep you all posted as to what happens next as the news comes in.

Traffic Stop Results in $3.5 Million Worth of Marijuana and THC Cartridges