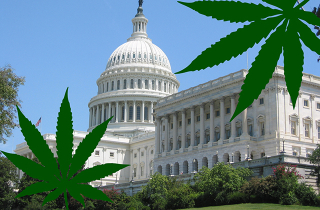 I am quite intrigued and pleased that this week the US House of Representatives has scheduled a hearing titled “Marijuana Laws in America: Racial Justice and the Need for Reform.”  The official notice of the hearing is here, and the event will be conducted by the Crime, Terrorism and Homeland Security Subcommittee of the Committee of the Judiciary and will take place on Wednesday, July 10, 2019 at 10:00am in Room 2141 of the Rayburn House Office Building in Washington DC.

Based solely on the title given to this hearing, I would expected it to be focused principally on racial disparities in arrests and on other racialized aspects of the enforcement of marijuana prohibitions.   But the official witness list for the hearing shows that two of the four scheduled witnesses are doctors while another is the CEO of the Cannabis Trade Federation.   One scheduled witness who does work in the criminal justice, Marilyn Mosby, the chief prosecutor for Baltimore City, surely can and will speak to racial justice issue in the application of marijuana laws.  But I am not entirely sure the other witnesses will be focused on racial justice specifically or just the need for reform generally.

Kyle Yeager at Marijuana Moment has this helpful review of what we might expect from the witnesses and the significance of this event.  Here are excerpts:

Given the backgrounds of these individuals, it seems apparent that committee members will be discussing not whether the U.S. should end federal cannabis prohibition, but will focus primarily on how to do it.

Witnesses [will] include Malik Burnett, a physician at Johns Hopkins Bloomberg School of Public Health who previously served as the Washington, D.C. policy manager at the Drug Policy Alliance’s Office of National Affairs, where he helped lead a successful ballot initiative campaign to legalize cannabis in the nation’s capital in 2014.

Baltimore State’s Attorney Marilyn Mosby, who announced in January that her office would no longer prosecute cannabis possession cases and would work to clear the records of certain individuals with prior marijuana convictions, is also being invited to testify.

David Nathan, a physician and board president of the pro-legalization group Doctors for Cannabis Regulation (DFCR), will also appear before the committee. He told Marijuana Moment that he looks “forward to discussing the evidence-based health effects of cannabis, the failure of prohibition, the inadequacy of decriminalization, and the public health and social justice benefits of effective regulation.”…

Finally, Neal Levine, CEO of Cannabis Trade Federation, will be the minority witness—which is noteworthy in and of itself, as Levine advocates for legalization, while one might expect the minority Republican party to invite someone who shares an opposing perspective on ending prohibition. “I cannot comment on what has not been announced publicly by the committee, but I would welcome the opportunity to share the perspective of our members,” Levine, who previously served as a staffer for the Marijuana Policy Project, told Marijuana Moment. “We are especially well positioned to discuss the challenges arising from the inconsistency between state and federal cannabis laws.”…

While lawmakers aren’t expected to vote on any particular bill at the hearing, it will nonetheless be one of the most significant congressional developments on marijuana reform to date.

What Is Biden’s Beef With Cannabis? What’s canceled going on with Biden’s perspective on the cannabis plant? Does he blame his son Hunter’s substance...