As CBD continues to make its way around the world, the craze has consumers curious about the possibilities of other cannabinoids beyond the traditionally-known cannabis molecule, delta-9 THC. The new up-and-comer seems to be delta-8 THC, which is known to cause effects similar to delta-9, though tends to impart a more subdued, controlled experience.

Delta-8’s rise in popularity is largely thanks to the 2018 Farm Bill, legislation that has permitted hemp-derived products in all 50 U.S. states. Delta-8 THC preparations can be derived from hemp and contain less than .3%, thus making them a hemp product that can be widely sold and distributed similar to CBD products (though some states have additional delta-8 specific laws).

The widespread availability of delta-8 THC and lack of delta-9 molecules has led many to wonder: will consuming delta-8 affect the outcome of a drug test?

The Many Types of THC

The Cannabis Sativa plant is known to produce at least 113 different cannabinoids, but most (if not all) of them come from the same precursor cannabinoid acid, CBGA. Enzymes within the plant transform CBGA into all the other cannabinoid acids, like THCA and CBDA, which then become the cannabinoids we know and love when decarboxylated (i.e heated). CBGA becomes THCA, which becomes THC. While the many cannabinoids produce a wide variety of effects, their differences are a matter of only slight chemical changes.

Thus, though they are different cannabinoids with different effects, delta-8 THC and delta-9 THC are nearly identical chemically; a chemical bond is displaced by just one position. THCV, yet another THC variant is able to suppress appetite instead of stimulate it, at odds with how we typically expect THC to behave. 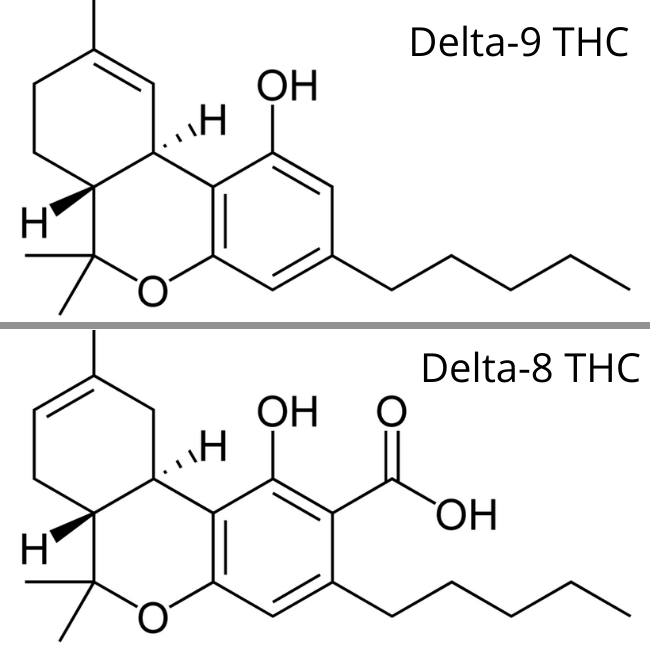 A comparison of the chemical structures of Delta-9 THC vs. Delta-8 THC. photo credit

Similarly, the THC that creates the psychoactive effects from edibles is another type of THC, known as 11-hydroxy THC. Enzymes in our stomach alter delta-9 THC to become 11-hydroxy THC before it enters the bloodstream, and is the reason why edible highs can be very different from the effects of inhaled cannabis. Our bodies’ amazing chemistry allows us to distinguish these many different types of THC, but the question is, can a drug test?

Just as enzymes within the cannabis plant transform CBGA, our bodies break down THC into other chemical compounds. After a person’s metabolism breaks down THC, it results in smaller molecules called THC metabolites. The metabolites themselves may do different things, but they all display the same tell-tale chemical marker showing that THC was processed in a person’s body. These are the chemical signals that drug tests look for. 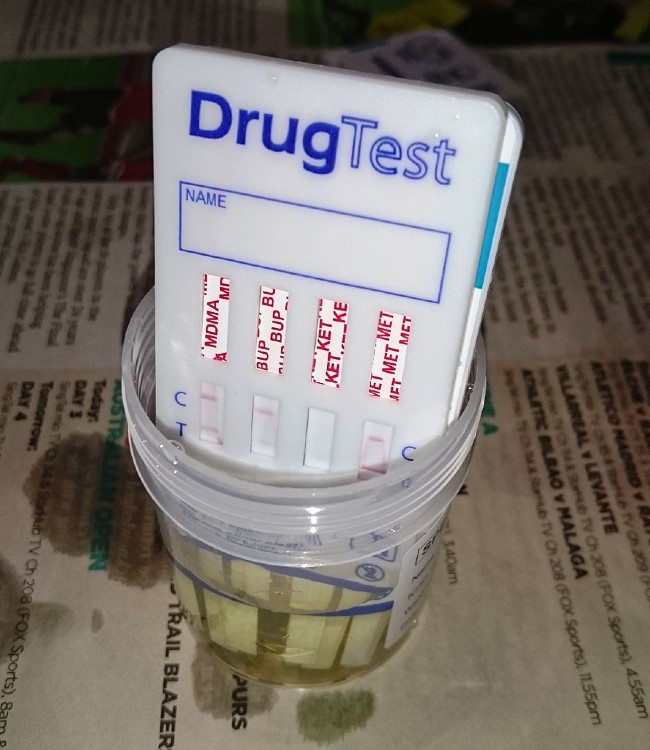 Regardless of the form of THC that it is present, they all appear the same on a drug test. photo credit

All THC molecules will break down into THC metabolites, regardless of the THC formation they start out as. Thus, to a drug test, delta-8 THC, 11-Hydroxy THC, and delta-9 THC will all look the same. The tests do not look for what went in, just what came out.

Even if this were not the case, delta-8 THC products may cause a person to fail a drug test. Just as with CBD products, delta-8 preparations may contain .3% THC or below. While still a small amount, it may be enough for the drug test to detect, especially if a person is using delta-8 or CBD products regularly. Again, drug tests are not finely-tuned instruments. They do not look for levels of THC, just the presence of it. It should be noted that for this reason, CBD products may also cause a person to fail a drug test.

The first and most obvious way to pass a drug test if you’ve been consuming delta-8 THC is the same as delta-9, cease consumption for a period of time long enough for your body to process it out. The general rule of thumb is 3-4 weeks, however, the actual time will vary by person, depending on consumption habits and the speed of their metabolism.

If time is a factor, again, trusted methods that work for delta-9 will work here as well. Methods used will differ depending on a saliva, urine, or hair test. Again, while these are separate cannabinoids, drug tests see them similarly, and thus methods that help with one will do so the other. Outside of obtaining independent lab testing beforehand, the best bet to know if you’ll pass a cannabis drug test is to buy one over the counter and test your preferred deterrent at home. Be aware though, at-home drug tests have a few quirks to know about.

Have you failed a drug test from consuming Delta-8 THC? Or passed one? Tell us all about it in the comments.