With the growth of new laws, the United States is quickly developing marijuana-legal spaces, allowing for the plant’s increasing ubiquity and regulation. California, Colorado, Washington, Oregon, and several other states have led the way on marijuana legalization, with many more states considering decriminalization or allowing the use of marijuana for medical purposes.

Cannabidiol, or CBD, has become particularly popular and trendy. It is one of many cannabinoid compounds found in hemp and other plants in the cannabis family. CBD usage has seen some drastic legalization in recent years, leading to new opportunities for brands and businesses throughout the country, restaurants included. However, the laws governing the serving of CBD in restaurants are more complicated than you think.

CBD has been said to help relieve pain, soothe muscle aches, calm inflammation, and provide a general sense of calm. It has been included in a wide range of products, from oils to lotions and balms, and most people are under the impression that CBD is legal throughout the country. Despite this, CBD products are not technically legal in all 50 states (yet).

Most CBD products are derived from hemp, which by definition means they contain less than 0.3 percent THC (another common cannabinoid). Hemp is considered legal to own and distribute. Many growers and members of the cannabis industry cite the Agricultural Act of 2014 as proof that hemp-derived CBD is legal. However, the bill itself only states that it’s legal to grow hemp for academic research or under a state pilot program.

About 40 states currently have laws allowing pilot programs, and 19 of those states authorize active programs for cultivating and researching hemp under the guidelines set by the Agricultural Act. In the other ten states, growing hemp is considered a felony, even if the hemp contains no percentage of THC.

The Drug Enforcement Agency still considers CBD illegal based on federal laws, suggesting that it is still possible for someone to be arrested for using CBD. Granted, an individual using any CBD product for its potential therapeutic effects probably won’t get in trouble with the law, but the ambiguity of the laws can potentially get sticky for businesses and restaurants. On top of that, the FDA still does not approve the use of THC or CBD in food, which is why you may not see every corner diner or bakery serving CBD-infused goods. 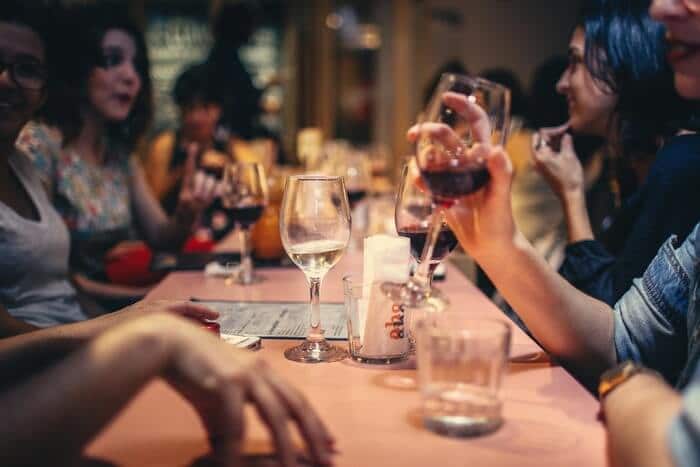 With all that said, there are still plenty of restaurants serving CBD-infused dishes and drinks. Here are some of the most popular.

Monarch and the Milkweed

Located in Burlington, Vermont, Monarch and the Milkweed is a pastry shop, fine-dining restaurant, and cocktail bar rolled into one, all headed by Andrew LeStourgeon and Rob Downey. The eatery has begun incorporating hemp-derived CBD into many of its baked goods, and unlike other restaurants on this list, Monarch and the Milkweed is one of the few adding THC to some of its pastries.

Ankeny Tap and Table is a pub located in Portland, Oregon, a growing CBD capital in its own right. This pub features a rotating list of seasonal beers, including some CBD-infused brews like the Two Flowers IPA from Coalition Brewing.

Another Portland, Oregon favorite, Harlow is best known for its extensive list of juices, smoothies, and elixirs that mix fresh fruits, herbs, and vegetables. For just a few dollars, Harlow allows you to add drops of CBD into any blended beverage of your choosing. The restaurant has also been experimenting with a lavender CBD steamer containing cashew-hazelnut milk and honey simple syrup made in-house, as well as CBD-infused ice cream.

The Original Hemp Café and Lounge

One of the original restaurants offering hemp-infused food and drink, the Original Hemp Café in Colorado Springs offers a huge selection of mixed coffee drinks, mocktails, crepes, and more infused with CBD.

With locations in Tribeca and Highline, Bubby’s is a New York City institution. This upscale diner-style eatery was founded by now-owner Ron Silver. Silver developed and introduced Azuca, a CBD-infused sweetener, which can be added to coffee, tea, lemonade, and other beverages on the Bubby’s menu.

With locations throughout New York City, Kokus offers vegan soft-serve yogurt. Kokus uses probiotic-rich cultured coconut cream as its base and then provides a wealth of superfood toppings, including bee pollen and CBD cacao.

Bondi Harvest is a health-rooted restaurant in Santa Monica serving everything from burgers to acai bowls. The eatery offers options to add hemp protein to your dishes or CBD oil to any of their coffees, teas, smoothies, and other drinks.

In terms of the future, you can expect even more restaurants to add CBD-infused fare to their menus, but that growth will be faster in states like Colorado, New York, and Oregon, where legislation supporting CBD usage coincides with established food scenes. However, as legislation regarding CBD and hemp usage expands, you can expect more CBD-rich menus throughout the country. It’s really just a matter of time.

Life After Lockdown: How to Manage Anxiety As We Enter the “New Normal”