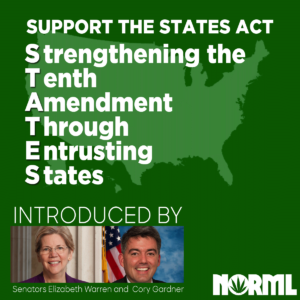 The question in the title of this post was my reaction of this news out of Congress as reported here by Marijuana Moment:

Reps. Earl Blumenauer (D-OR) and David Joyce (R-OH) filed the Strengthening the Tenth Amendment Through Entrusting States (STATES) Act, appearing alongside cosponsors Reps. Barbara Lee (D-CA) and Joe Neguse (D-CO) at a press conference. Sen. Cory Gardner (R-CO) and Elizabeth Warren (D-MA) filed the Senate version of the bill…. The legislation would amend the Controlled Substances Act to protect people complying with state legal cannabis laws from federal intervention, and the sponsors are hoping that the bipartisan and bicameral nature of the bill will advance it through the 116th Congress.

“I’ve been working on this for four decades. I could not be more excited,” Blumenauer told Marijuana Moment in a phone interview. While other legislation under consideration such as bills to secure banking access for cannabis businesses or study the benefits of marijuana for veterans are “incremental steps that are going to make a huge difference,” the STATES Act is “a landmark,” he said….

The congressman said it will take some time before the bill gets a full House vote, however. Rep. Jim McGovern (D-MA) recently suggested that the legislation would advance within “weeks,” but Blumenauer said it will “be a battle to get floor time” and he stressed the importance of ensuring that legislators get the chance to voice their concerns and get the answers they need before putting it before the full chamber. “We want to raise the comfort level that people have. We want to do it right,” he said. “There’s no reason that we have to make people feel like they’re crowded or rushed.”…

Asked whether he’d had conversations with House Speaker Nancy Pelosi (D-CA) about moving cannabis bills forward this Congress, Blumenauer said there’s been consistent communication between their offices and that the speaker is “very sympathetic” to the issue and “understands the necessity of reform.”

There are 26 initial cosponsors — half Democrats and half Republicans—on the House version. Reps. Ro Khanna (D-CA), Lou Correa (D-CA), Ed Perlmutter (D-CO), Matt Gaetz (R-FL) and Don Young (R-AK) are among those supporters. The previous version ended the 115th Congress with 45 cosponsors.

For the most part, the latest versions of the legislation are identical to the previous Congress’s bills, though there are two exceptions. Previously, there was a provision exempting hemp from the definition of marijuana, but that was removed—presumably because it is no longer needed in light of the passage of the 2018 Farm Bill, which federally legalized the crop.

The bigger change is that the new version contains a section that requires the Government Accountability Office to conduct a study on the “effects of marihuana legalization on traffic safety.” Among other data points, the office would be directed to collect info on “traffic crashes, fatalities, and injuries in States that have legalized marihuana use, including whether States are able to accurately evaluate marihuana impairment in those incidents.” A report on those effects would be due one year after the law is enacted.

This article in Roll Call, headlined “Marijuana bill could help Cory Gardner’s re-election chances. Will Senate GOP leaders get behind it?,” provides some more insights into the politics in play. Here are excerpts:

Gardner acknowledged the bill will have a harder time in the GOP-controlled Senate than in the Democrat-led House, saying he was working to convince Judiciary Chairman Lindsey Graham to advance the bill and Majority Leader Mitch McConnell to eventually allow it to come to a floor vote. Graham, asked about the bill, said he hadn’t thought about marking it up. “I’m not very excited about it,” the South Carolina Republican said….

Gardner is up for re-election in 2020 in a state that legalized recreational marijuana, and allowing him a legislative win could help the GOP retain control of the Senate. On the other hand, Republican leadership may be loath to give some Democratic co-sponsors running in 2020 — whether for re-election or the presidency — political victories.

If Congress passes the proposal, Gardner said President Donald Trump will sign it. “The president has been very clear to me that he supports our legislation,” Gardner said. “He opposed the actions that were taken by the Attorney General [Jeff Sessions] to reverse the Cole memorandum and believes we have to fix this.” The Cole memorandum is Justice Department guidance against prosecuting federal marijuana laws in states that have legalized it.

With Democrats in Control, Investors Are High on Cannabis