While March Madness plays out on the court, we’ve got a competition on the sidelines. Welcome to Leafly’s Strain Madness, where your votes have decided which strain gets dubbed the champion of all cannabis.

All week long you’ve been voting to see your favorite strain through to the final. Today we reveal the champion.

After four rounds of intense competition, we can crown the champion of Strain Madness 2019. Every day this week we asked you to share your thoughts by voting for the best strain and your favorite terpene profile. You all did not disappoint!

The early matchups had some wild outcomes. White Widow made an unpredictable comeback in the first round against Green Crack, and GSC unceremoniously knocked off one of its legendary parent strains, OG Kush, in round two.

The championship matchup followed the same unpredictable path as Granddaddy Purple, winner of the myrcene-division, went up against the limonene-dominant phenotype of Sour Diesel.

Receiving 58% of votes in the final matchup (and over 31% of votes in each round), we finally have a champion for our 2019 Strain Madness.

GDP is a cross of two stout indica strains: Big Bud and Purple Urkle. Both parents have a recognizable influence in this cultivar’s combination of characteristics, notably its sizeable flowers and deep purple coloring. In addition to its visual beauty, our champion strain is appreciated for its potent, full-bodied relaxation.

The flowers of GDP erupt with a sweet berry aroma and subtle earthiness before its calming, sleepy effects take hold. The aromas, flavors, and effects of GDP are attributed to its chemical composition and the combination of compounds, like its array of terpenes. 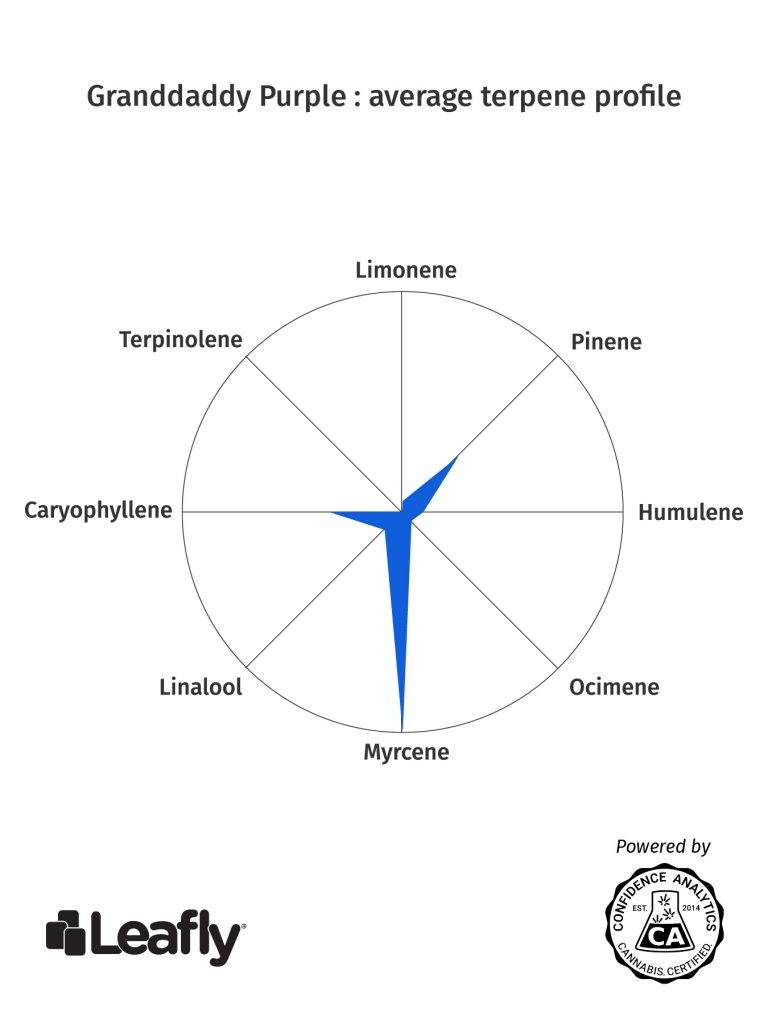 This snapshot of Leafly’s verified lab data helps us see GDP’s primary terpene, myrcene. Myrcene is the most common terpene in cannabis strains. It has an earthy, herbal aroma when isolated by itself and shows medical potential for managing pain, reducing stress, and helping with insomnia.

But myrcene isn’t the whole story. You’ll also notice secondary terpenes like pinene and caryophyllene in the mix, as well as minor terpenes like linalool, limonene, ocimene, and humulene. All of these terpenes work in unison with a high-THC content to produce GDP’s classic flavors and effects.

Thanks for playing Leafly’s Strain Madness! We hope you have a better understanding of some of Leafly’s top strains and of terpenes and how they interact to create different flavors and effects in cannabis. Check out more information on terpenes on Leafly.

Not sure why this strain won? Leave a comment below!