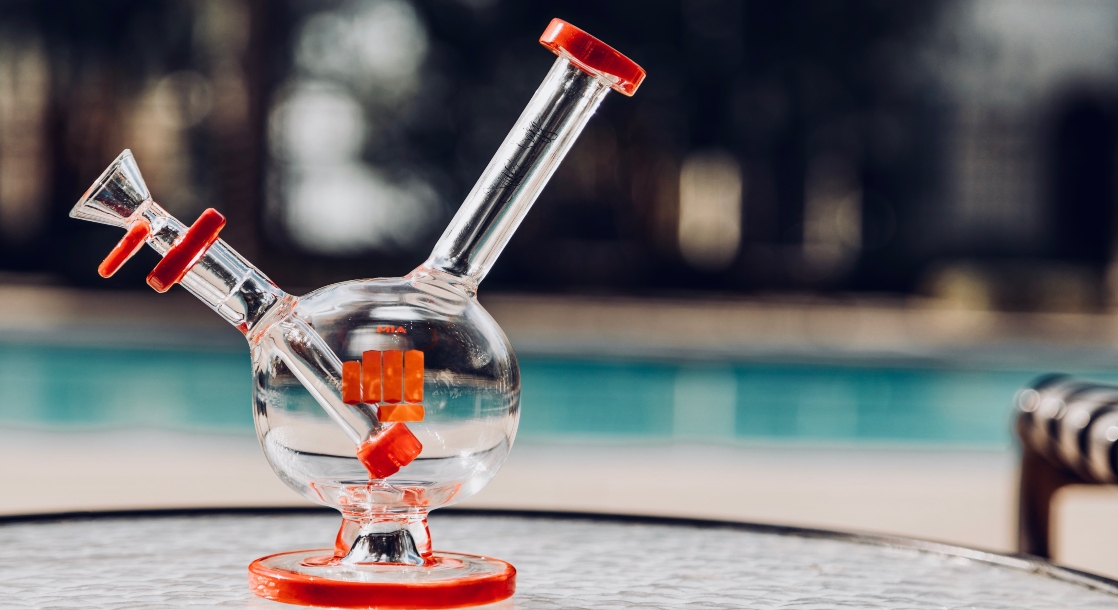 The two-in-one bong and dab rig is an ideal tool to keep you happily floating over the Magic City.

After taking off with the launch of Snoop Dogg’s aviation-themed POUNDS G2 glassware line, buckle up and dust off that grinder as we touch down where it’s always summertime: in Miami, Florida.

To commemorate Snoop’s favorite American cities, the G2 line offers an immaculately crafted bong tailored to each respective party town. For Miami, Grasscity’s got the MIA, named after the Miami International Airport, the nation’s third-busiest airline hub. And after landing, the MIA perfectly complements a hazy-faced journey across some of Uncle Snoop’s favorite destination spots.

But before we dive in for a Floridian flourish, let’s review some of the MIA’s key features.

The MIA doubles as both a traditional water pipe for smoking primo buds and a dab rig for puffing top-shelf extracts. Stylishly packaged in a cushioned box and forged from highly durable borosilicate glass, the bubble-base bong should survive the most turbulent rides from the Everglades to Biscayne Bay.

The MIA’s built-in showerhead percolator ensures that even the biggest smoke clouds are delivered as cool as a fresh sea breeze. The bong-rig hybrid also comes with a 14.5mm glass male stem for flower and a 14.5mm quartz banger for dabs. If you forgot to pack your dab equipment (it happens to the best of us), the MIA’s got your back, since a carb cap and glass wand are included, too.

Once you’re thoroughly lit like a runway, it’s time to take a tour of our favorite Dogg’s hottest spots in Miami.

The first stop on any vivacious vacay is the hotel, and the D-O-double-G only settles for the best that Miami Beach has to offer. And that best is the Fontainebleau Hotel.

The hotel’s architect once wrote, “If you create a stage and it is grand, everyone who enters will play their part.” Tha Doggfather’s gangsta legacy certainly plays into the luxury hotel’s history, as the Black Tuna Gang once hustled the majority of America’s weed through the Fontainebleau back in the ‘70s.

Fictional gangsters have also staged their claims to fame at the cinematically picturesque resort. The mafioso TV drama The Sopranos, the James Bond epic Goldfinger, and yes – the faux biopic of Tony Montana – Scarface, were all shot at the five-star Fontainebleau, too.

After kickin’ it poolside (and maybe ripping another heavy hit or twelve off the MIA), it’s time to grab some eats. Might as well gas up by swinging by DJ Khaled’s celebrity soul-food joint, The Licking.

The Licking whips up all the standard fried fare one would find at any Southern grill: chicken wings, chicken croissants, and chicken & red velvet waffles, served alongside high-end resort staples like filet mignon, lobster, shrimp, and snapper. Major Key Alert: the most daring among your crew should take a shot at the spot’s Mystery Drinks, which come in “Famous” and “Dirty” varieties.

After you get the tummy loaded up on dinner, consider ordering another one to go. After all, it’s gonna be a wild ride, and we like that.

And legend has it that Roman Zolanski herself – a.k.a. Nicki Minaj – once dropped $20,000 on bottles of bubbly at this grand, decadent discotheque. You don’t have to blow that kind of green to party hardy at STORY, but keep that MIA handy for blowing plumes of the other green.

Once you cruise past Collins Avenue on your way away from STORY, you’ll want something to soak up all those Tom Collinses you downed earlier. No need to be posh at this hour; Snoop recommends scooting over to the nearest Waffle House to decompress after a long night of painting the town fifty shades of red.

You already know what it is at the Waffle House: platefuls of juicy-yet-crispy hash browns Chopped, Smothered, or Covered to your liking; grits swimming in butter; or just a good ol’ fashioned All American breakfast with bacon, eggs, toast, or sliced ham – because nothing stops a wicked hangover in its tracks like diner food from a familiar dive.

Once the night has come and gone, and the morning sun blazes its way into your party-rattled brain, it’s time to pack up, strap in, and lift off to the next POUNDS G2 destination. Stay tuned at MERRY JANE for more of Snoop’s City Guides, Tha Doggfather’s definitive weed-friendly travel guide for every city honored by the G2 pipe line.

This guide is sponsored by POUNDS.Visit Grasscity to cop the MIA glass for yourself here.